On occasion of launching TRCCS (Taiwan Resource Center for Chinese Studies) at Chulalongkorn University-Bangkok, Thailand, the National Central Library (NCL) holds an exhibition titled “The Beauty and Grace of Thailand—An Exhibition of Thailand in 'Taiwan Memory'”. The exhibition highlights the close connection and relations between Thailand and Taiwan. With seven themes on display, including statistics, rare books, Japanese investigation reports, memories of Taiwan’s celebrities, services of the public library, fun in daily life, footages, as well as getting souvenir stamps, with 107 books published over a period of 400 years, the exhibition shows the beauty and grace of Thailand in the memory of the Taiwanese people.

1. Interaction between Taiwan and Thailand 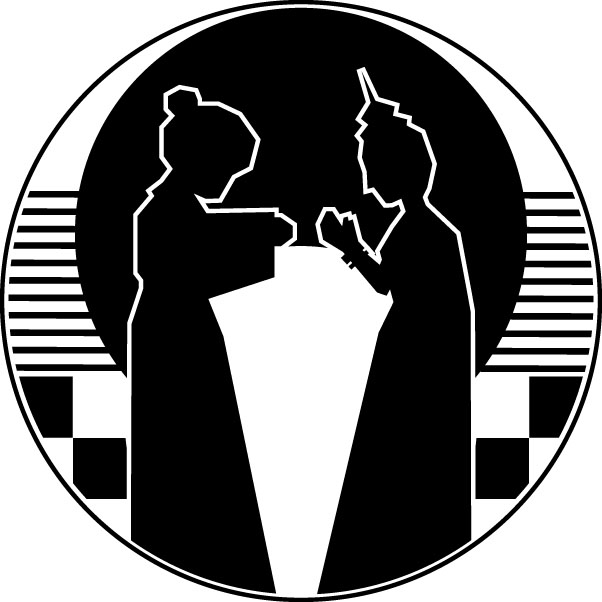 Some interesting statistics include: Thailand wins the 10th rank for the world’s overseas study destination among Taiwanese students; while, portion of overseas Thai students in Taiwan hold the 4th rank comparing to all foreign students from Southeast Asia.

In addition, Taiwan ranks the 19th export market and the 6th import market for Thailand. Major goods are integrated circuits and frozen fish.
Recent statistics show that the number of Thai people who reside in Taiwan makes up about 10 percent of all foreign residents in Taiwan. 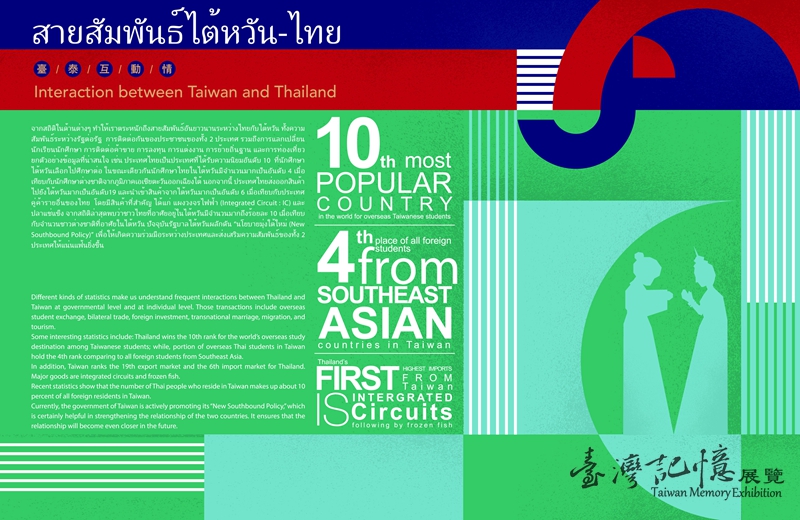 Currently, the government of Taiwan is actively promoting its “New Southbound Policy,” which is certainly helpful in strengthening the relationship of the two countries. It ensures that the relationship will become even closer in the future. 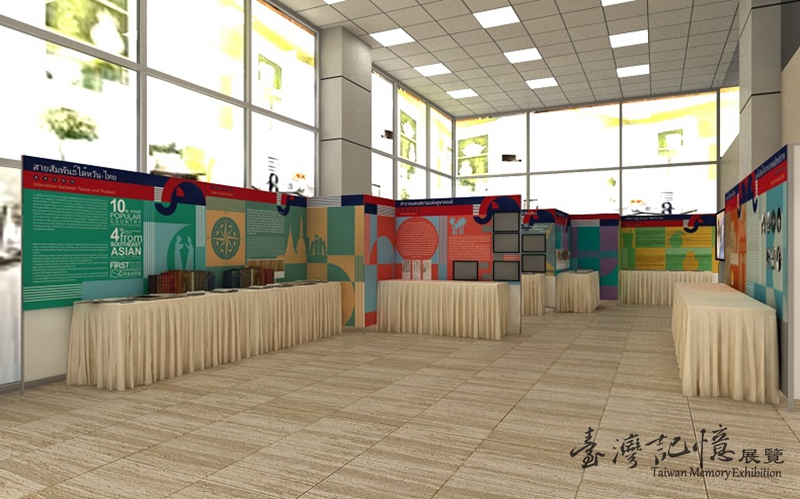 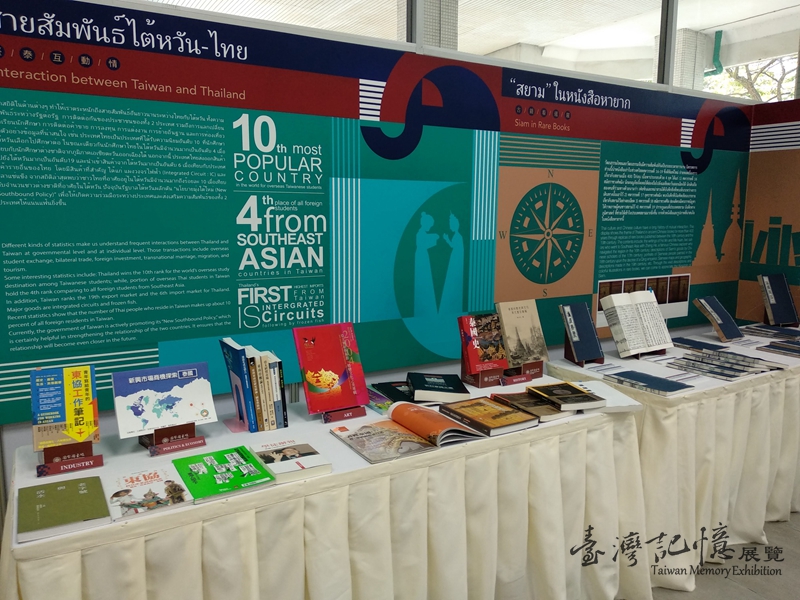 Thai culture and Chinese culture have a long history of mutual interaction. This display shows the theme of Thailand in ancient Chinese books for more than 400 years through 10 replicas of rare books published between the 16th century and the 19th century. 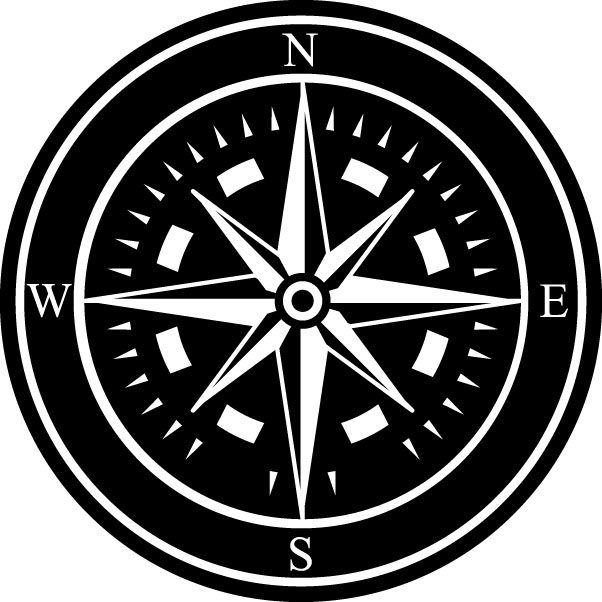 The contents include: the writings of Fei Xin and Ma Huan, two sailors who went to Southeast Asia with Zheng He, a famous Chinese explorer who navigated the region in the 16th century; descriptions of Siam’s goods by Chinese scholars of the 17th century; portraits of Siamese people painted in the 18th century upon the decree of a Qing emperor; Siamese maps and geographic descriptions made in the 19th century, etc.

Ying-ya Sheng-lan (Records on the Ocean)/ Ma Huan/16th century
Ma Huan, a Ming sailor, put what he saw and experienced when sailing to more than 20 lands in Southeast Asia in his book, Ying-ya Sheng-lan. He describes the customs of the Kingdom of Siam: “A Man has jewels embedded into his genitals upon the age of 20. The rich have gold bowls made to place pearls in them to make loud sounds. Those who have no golden bowls for jewelry are viewed as poor.” 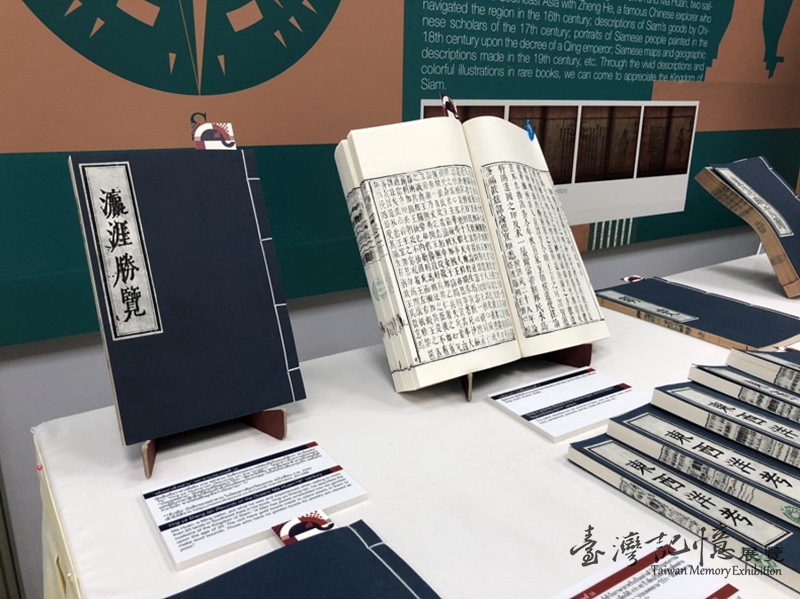 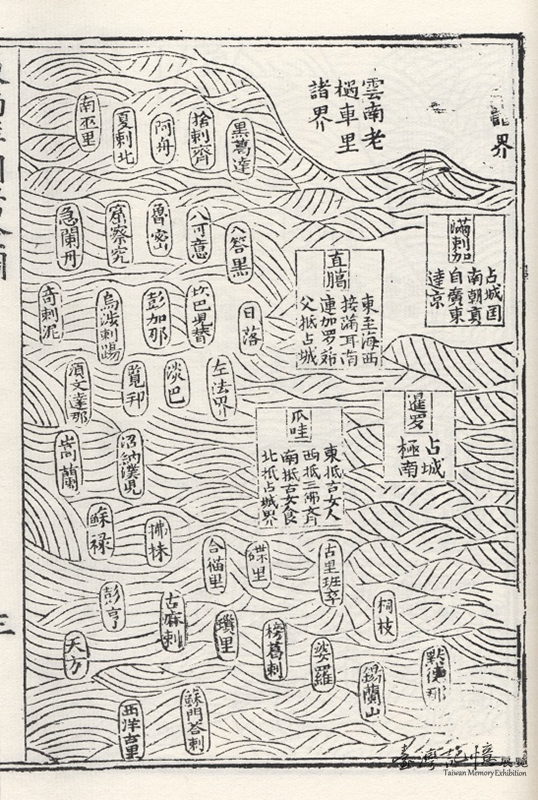 Through the vivid descriptions and colorful illustrations in rare books, we can come to appreciate the Kingdom of Siam. 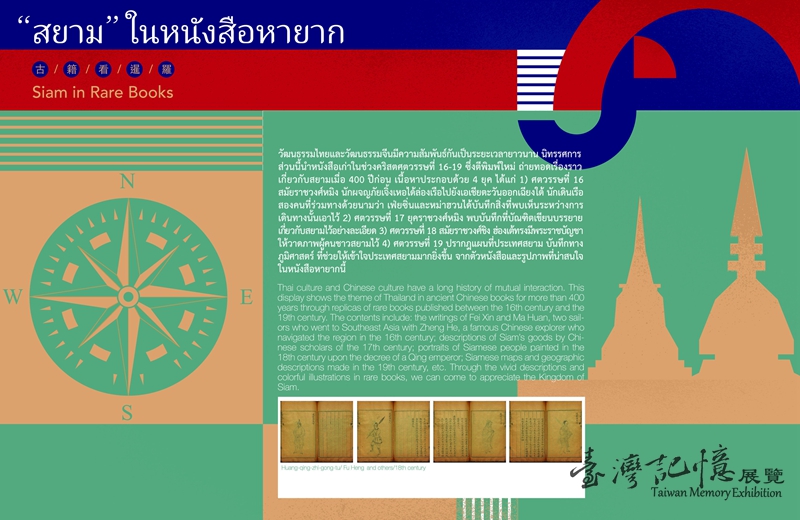 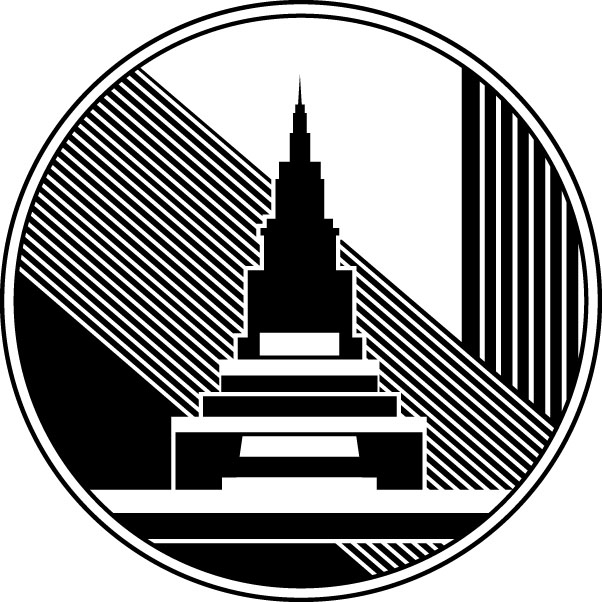 The history of Taiwan’s relations with Siam (“Siam” was changed to “Thailand” in 1939) during the Japanese Occupation. References to the period can be found on “Taiwan Memory” https://tm.ncl.edu.tw/index , an online database established by the NCL. For example, in 1935, “Siam Hall” was established for the “Taiwan Fair commemorating the 40th anniversary of Japanese rule” to showcase the products of Siam. 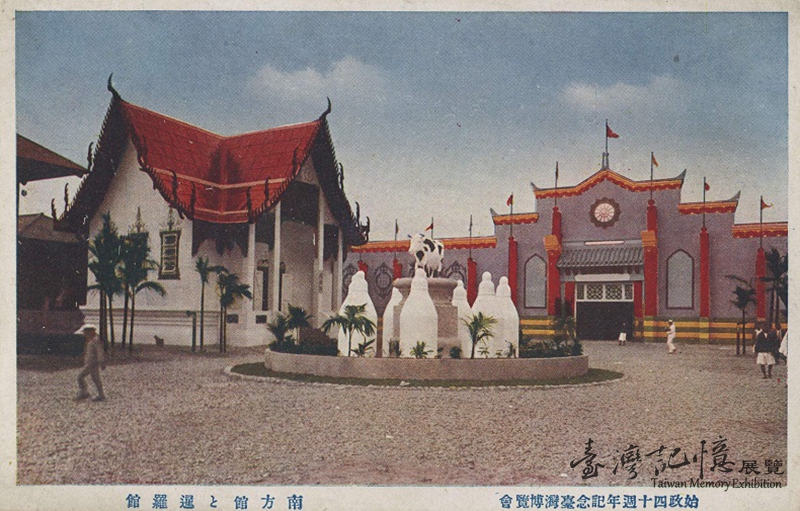 “The South Hall and the Siam Hall of Taiwan Fair for the 40th Anniversary of Japanese Rule”(NCL Accession No. 002415569)

All official reports of investigations conducted by the Japanese government recorded the geology and culture of Siam in great detail, an indication of the close connection of colonized Taiwan and Southeast Asian countries and the ambition of the colonizing government in expanding its territory. 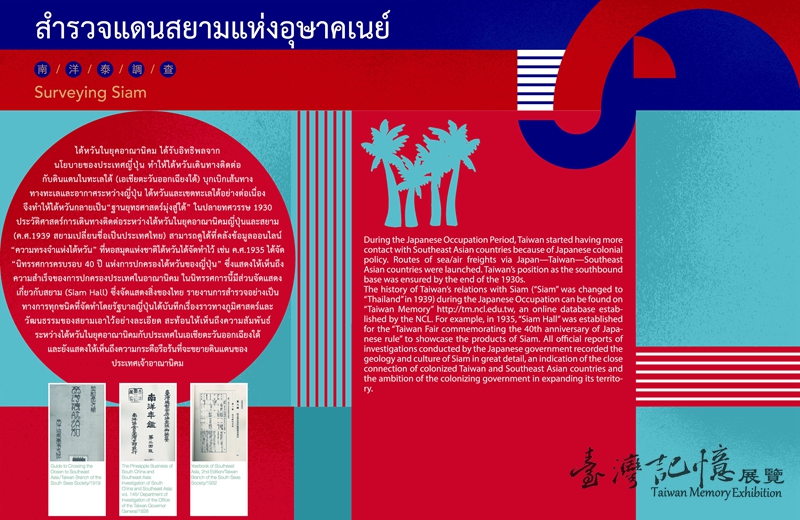 Taiwanese and Thai people always share a close bond. This section displays views toward Thailand of three Taiwanese female writers during 1960s to 1970s, as well as experiences and feelings toward Thai Buddhism expressed by a famous Buddhist master and three famous writers. 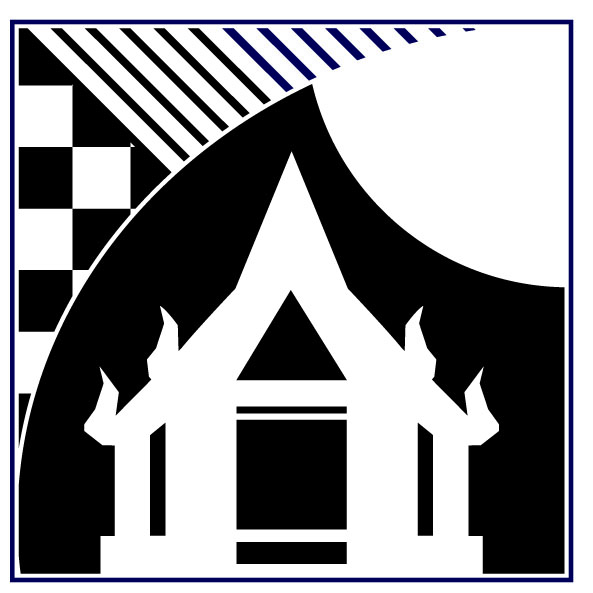 Celebrities Remembering Thailand include:
● The perception, manuscripts, and paintings from 3 Taiwanese female writers (Zhong Mei-yin, Hua Yan, and Liang Dan-feng) regarding their experience during their stay in Thailand. 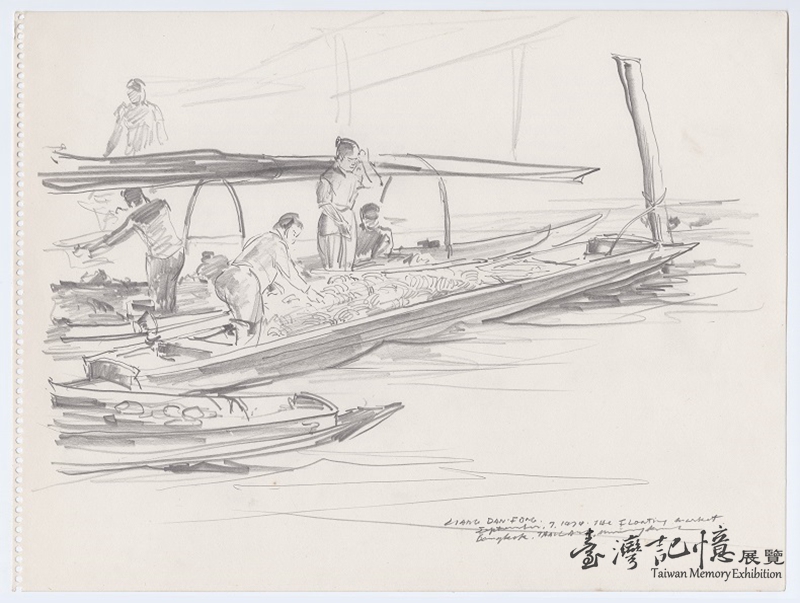 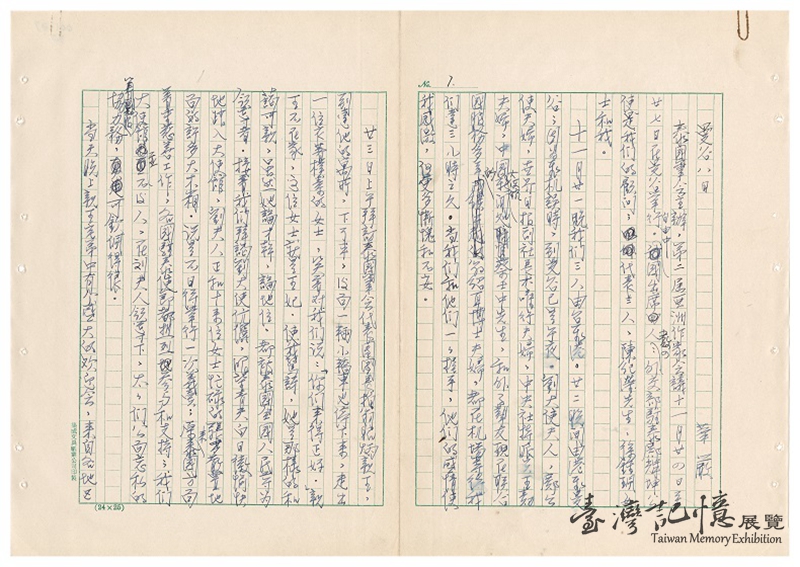 I brought with me love from the Republic of China, and now I will bring home love from Thailand. “8 Days in Bangkok”/ Hua Yan

● Descriptions of Thailand made by two famous Taiwanese writers (Hou Wen-yung and Wan Wan) who are popular in Thailand.
● Studying in a Buddhist Kingdom by the Venerable Jan Hai of Taiwan presenting his experiences while studying in Thailand in 1960s.
● Writings of Chiang Hsun, a famous Taiwanese writer who visited Chiang Mai in Northern Thailand in 2010, showing his experiences of Thai Buddhism through reading and chanting sutras. 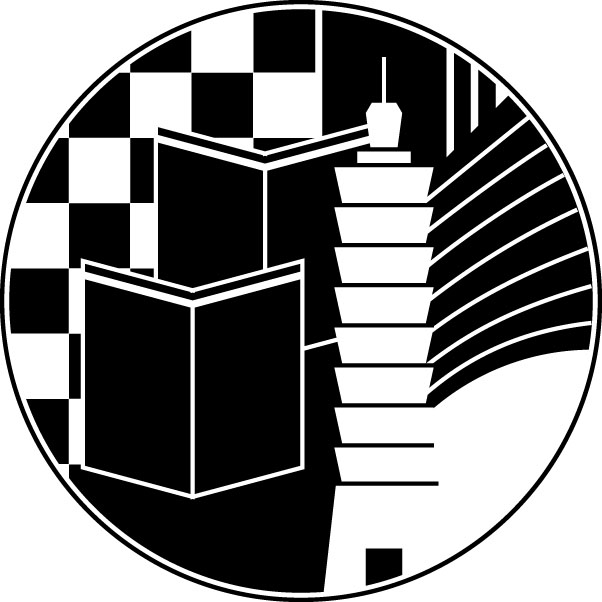 The libraries are enriching their collections of relevant books (such as the publication of books by Thai authors), newspapers, as well as audio and video materials, and also promoting reading and holding cultural activities with the participation of immigrants with special skills. 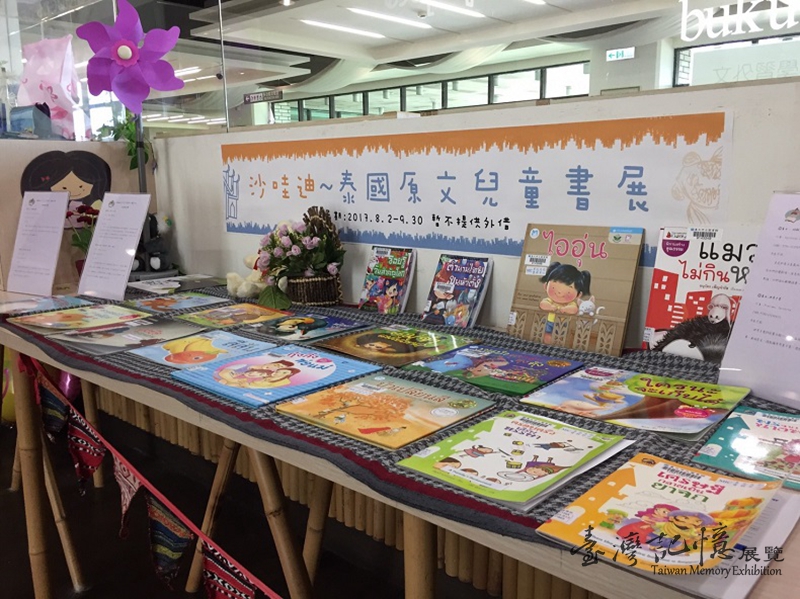 The “Sawadee—Exhibition of Children’s Books in Thai” held by the Taipei Public Library in August, 2017. 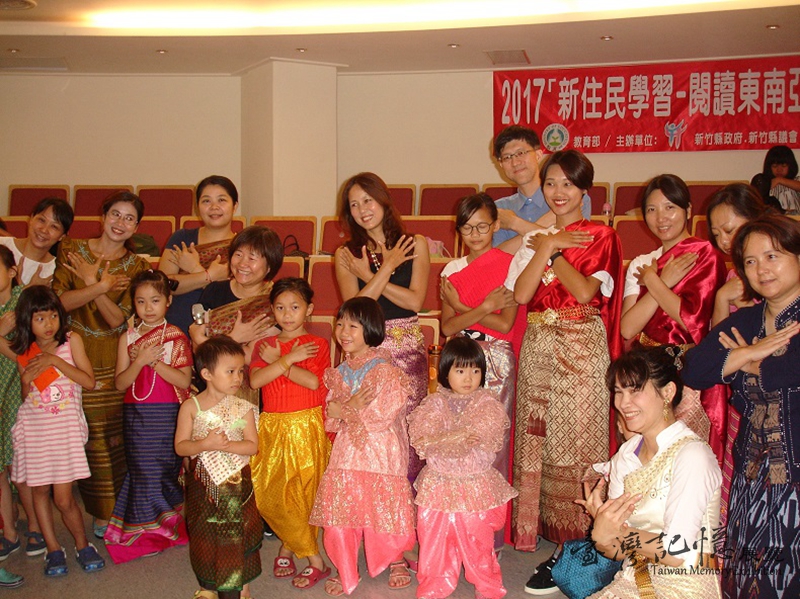 A parent-child reading workshop, was held by the Department of Cultural Affairs of Hsinchu County Government in 2017

The social impact of public libraries cannot be ignored as they play a direct and important role in ethnic fusion and extension education. 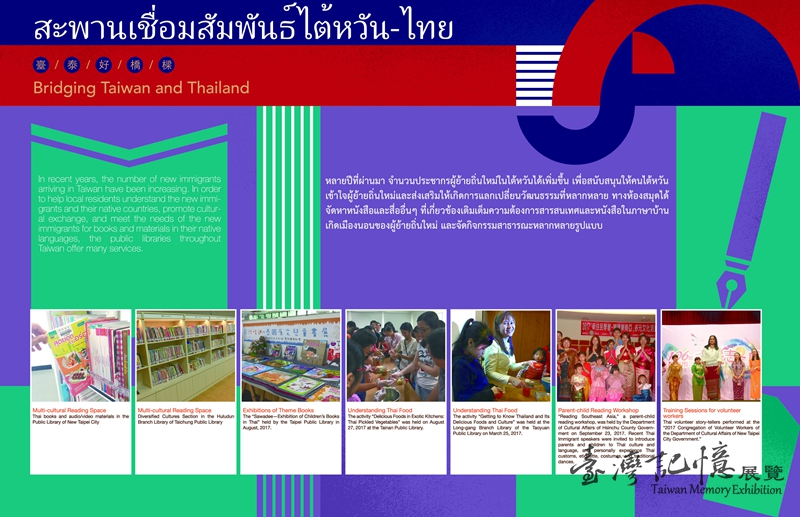 Taiwan and Thailand in English are often mixed up by foreigners who do not know any better. So in daily life, what fun differences can we find between the two countries? Let us get to know these fun facts through some lively and vivid illustrations. 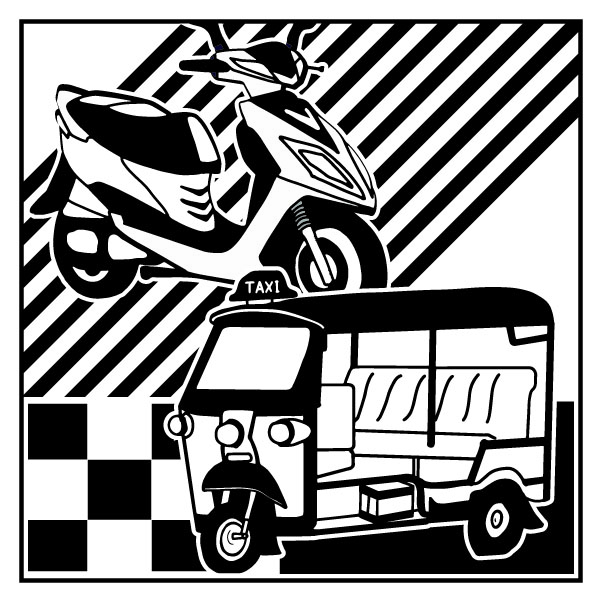 On hot summer days, it is indeed refreshing to have a handmade cold drink. Popular cold drinks have distinctive features in Taiwan and Thailand.

Taiwan: Taiwan’s pearl milk tea can be bought in handmade drink stores and has become famous throughout the world.

Thailand: Because of the hot weather all year round in Thailand, all kinds of cold drinks and ice treats are very popular in Thailand. The major difference between the ice treats in Thailand and those in Taiwan is that in Thailand they are always mixed with a lot of ice cubes and are much sweeter. Some Thai stores sell a special “Cup of Two Hearts” （แก้ว 2 ใจ）which combines two kinds of drinks in one cup. Local convenience stores even sell a three-in-one cup with three different drinks. 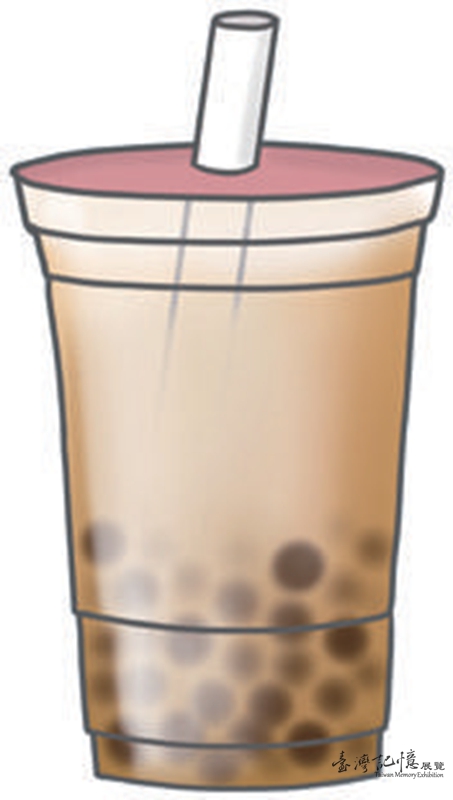 Originally grown in America, pineapples were imported to Asia in the mid-sixteenth century. Pineapples are an important fruit and a cash crop both in Thailand and Taiwan. They can be eaten simply as a kind of fruit, or they can be used as an ingredient in cooking. They can also be canned for export or made into pickled fruit or pineapple cakes as a dessert.

Sweet and sour pineapples not only can be eaten fresh, but also can be cooked for a great taste experience. Taiwan and Thailand’s pineapple dishes have their own unique tastes and feels. 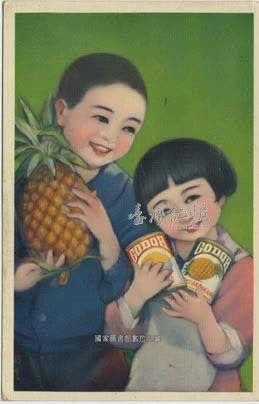 After undergoing improvement and adaptation, Thai guavas have become very popular in Taiwan.

Originally cultivated in America, guavas came to Asia via Europe. Thai guavas were introduced into Taiwan in 1970 and soon became very popular for their big size and crispy texture. Later Taiwan developed some improved varieties of the Thai guava, including “Pearl Guava” and “Crystal Guava,” and guavas became a common fruit in Taiwan as many fruit farmers chose to grow the new breeds of guava. 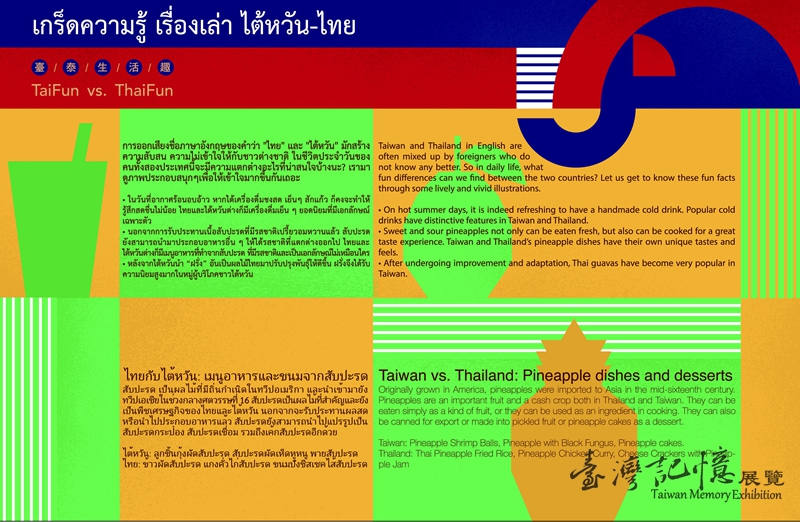 Illustrations of Taiwan and Thailand

Let us get to know these fun facts of Taiwan and Thailand through some lively and vivid illustrations.
Link: http://mdava.ncl.edu.tw/content.php?vid=2551 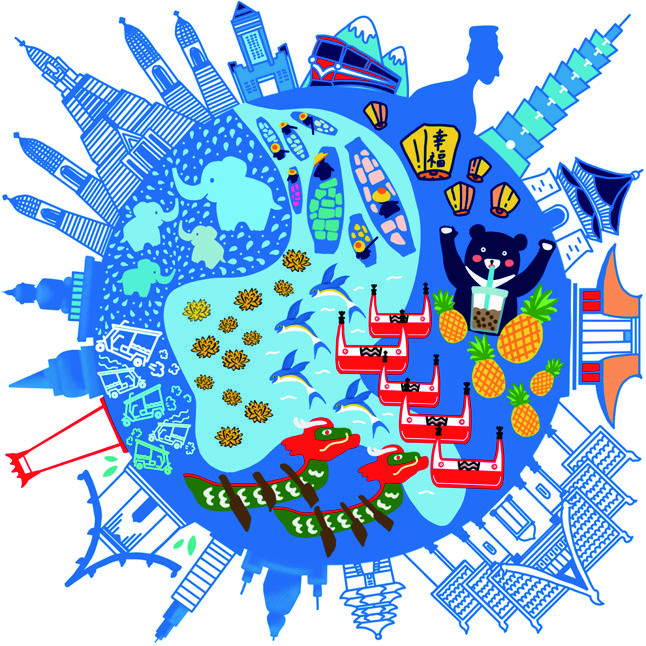 Illustrations of Thailand and Taiwan

The New Taipei Water Festival, also known as the Songkran Festival, is the most important festival for the Thai people and the people from Southeast Asia. Held annually between April 13 and 15, it is Thailand’s New Year festival. Thai people believe that spraying each other with clean water at this time can remove the bad luck and all kinds of misfortunes from the past year and usher in a lucky new year at the same time. Nowadays, the Songkran Festival is not only a traditional religious and cultural festival, but an important tourist activity that attracts a large number of tourists.

In recent years, with the arrival of more and more immigrants and foreign workers in Taiwan, local governments have responded to the special festival by holding similar activities, adding elements such as performances, food tasting, introducing Southeast Asian cultures, etc. which not only alleviate the homesickness of the new immigrants and foreign workers and strengthen their local identify, but also give the people in Taiwan opportunities to understand the cultures of Southeast Asian culture and take part in cultural exchanges. Such activities highlight Taiwan’s tolerance and emphasis on the cultures of diverse ethnic groups. 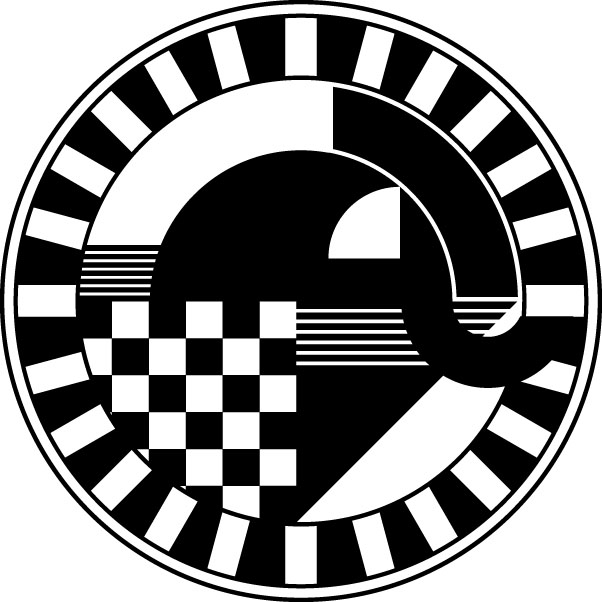 Pineapples are an important fruit both in Thailand and Taiwan, and pineapple products are widely popular. Thai exports of canned pineapple is ranked number one in the world, and Taiwan’s “pineapple cakes” are often purchased by tourists as gifts. Let us witness the process of making pineapple cakes though this short film made in a hundred-year-old cake shop in Taiwan. 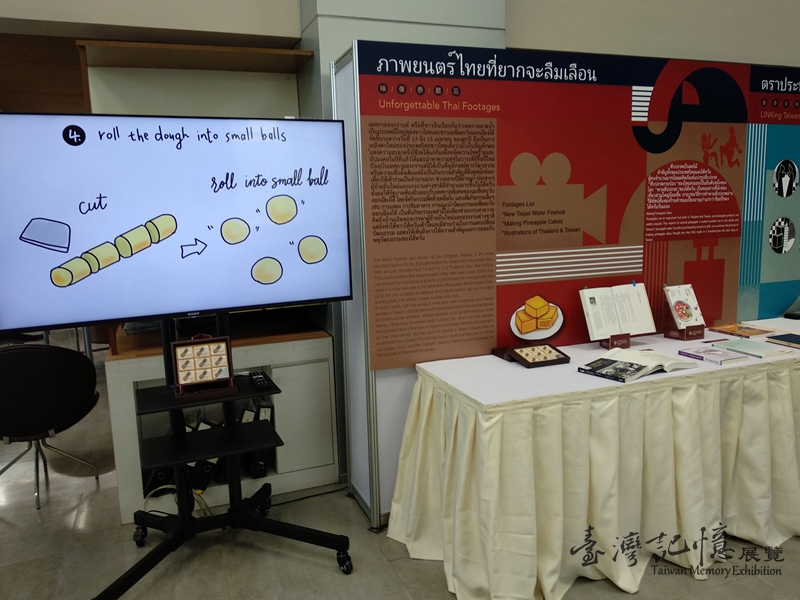 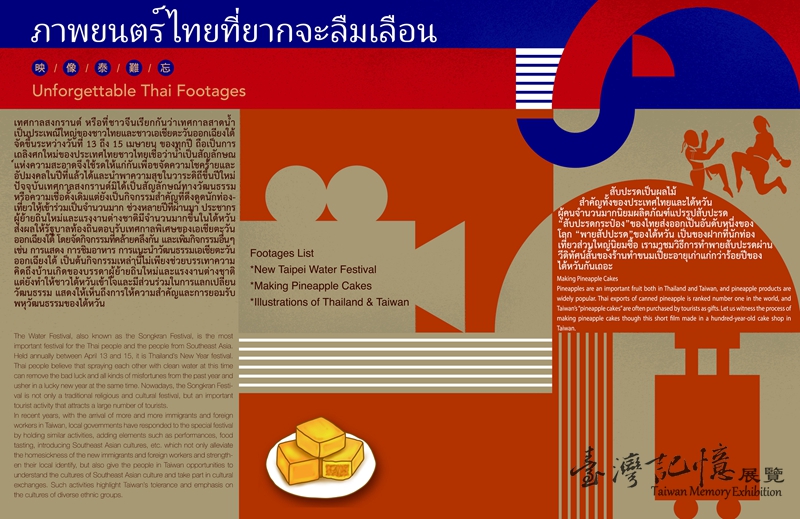 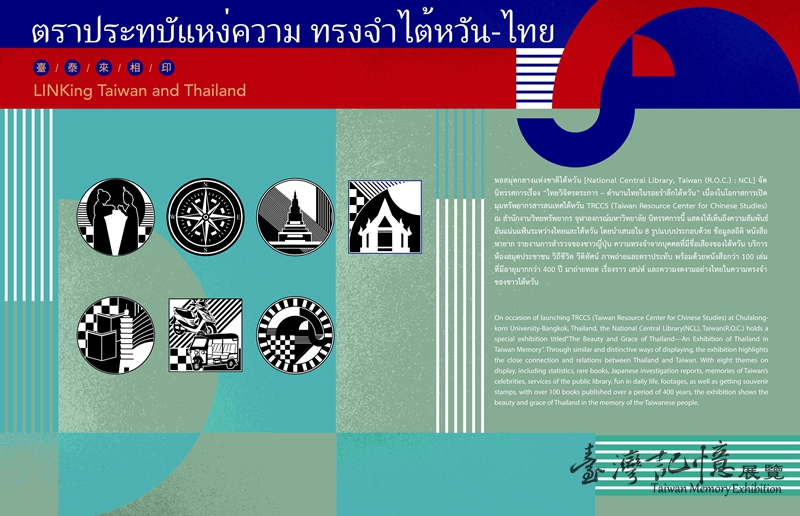 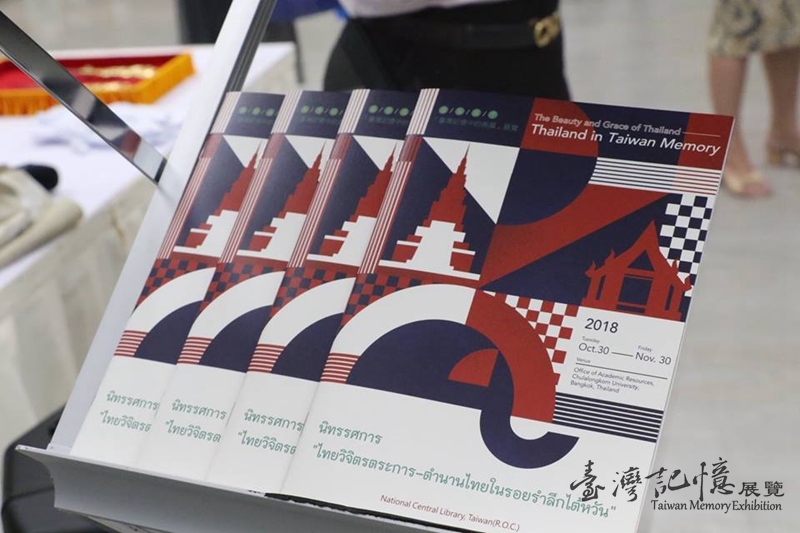