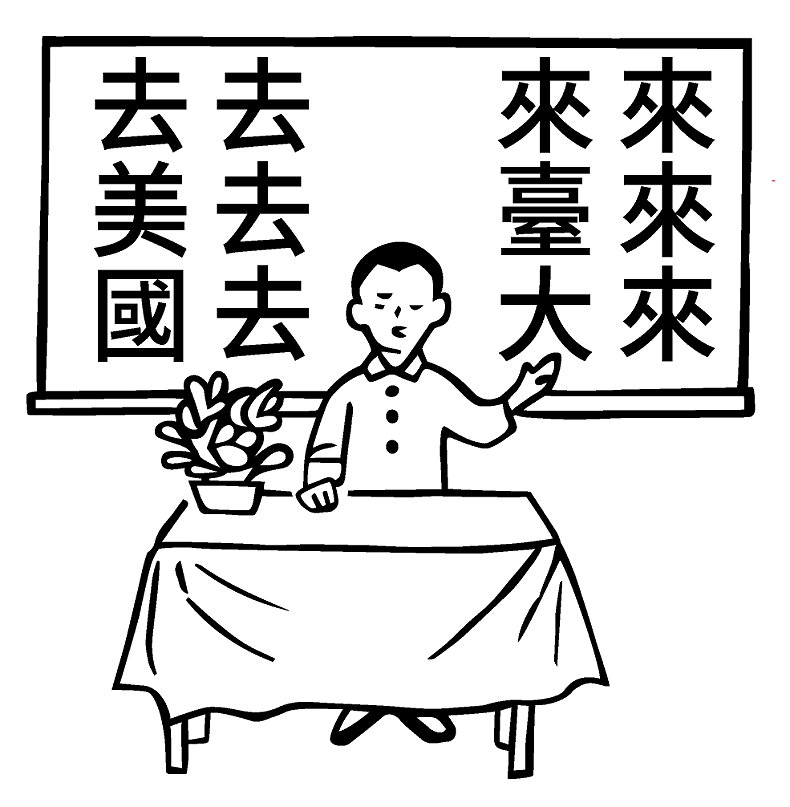 The exhibition showcases school memories from different generations based on content archived in the Taiwan Memory database. It is divided into four main units: traditional Chinese education (academies), Western education (missionaries and colonists), education after 1945, and a general survey of education in Taiwan. Exhibition content includes a themed book display, the exteriors of different academies, students in class during the Japanese occupation, and the content of Taiwan textbooks. The public and institutions are invited to participate and share their resources, jointly creating a chain of “school memories across the generations.” 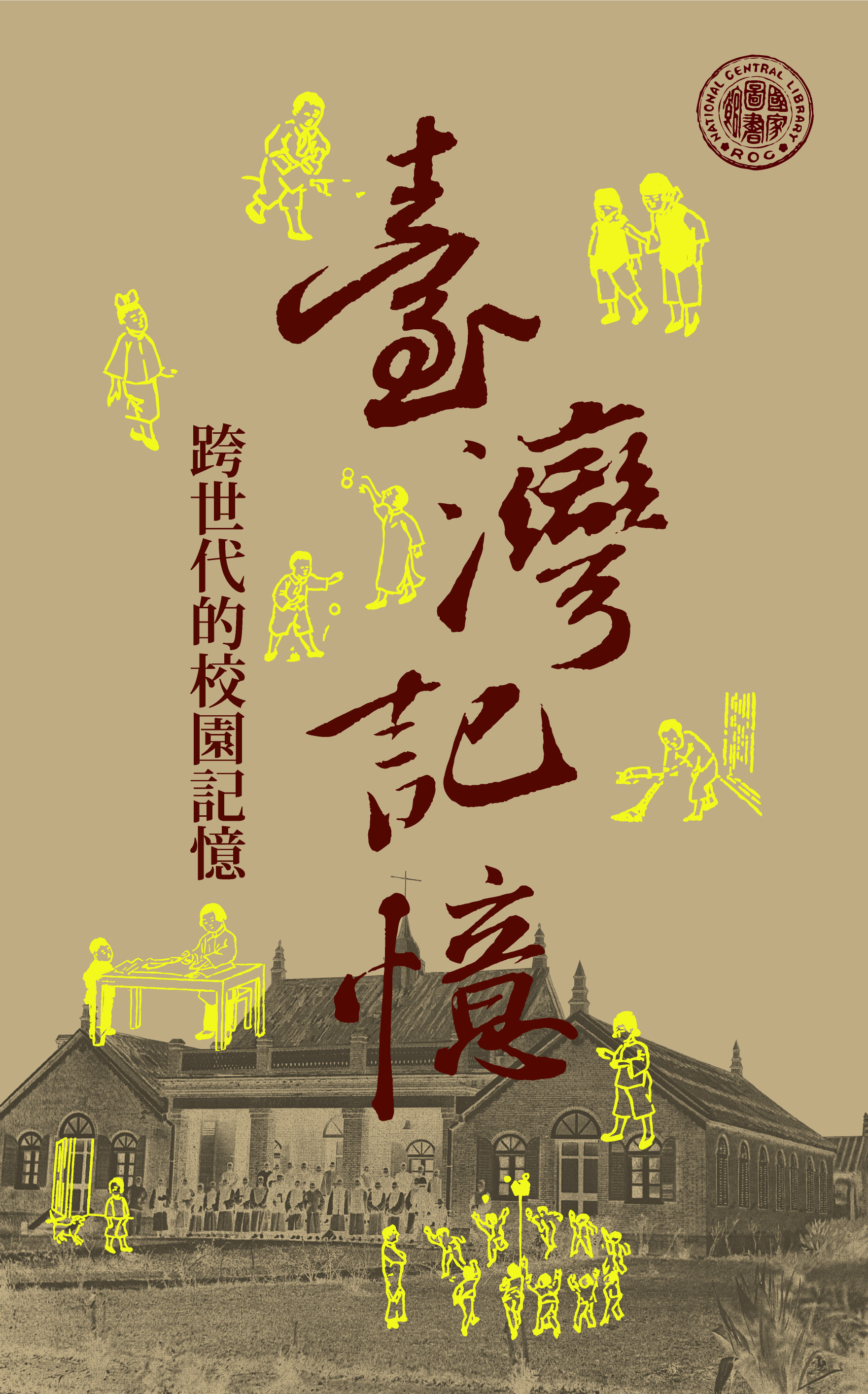 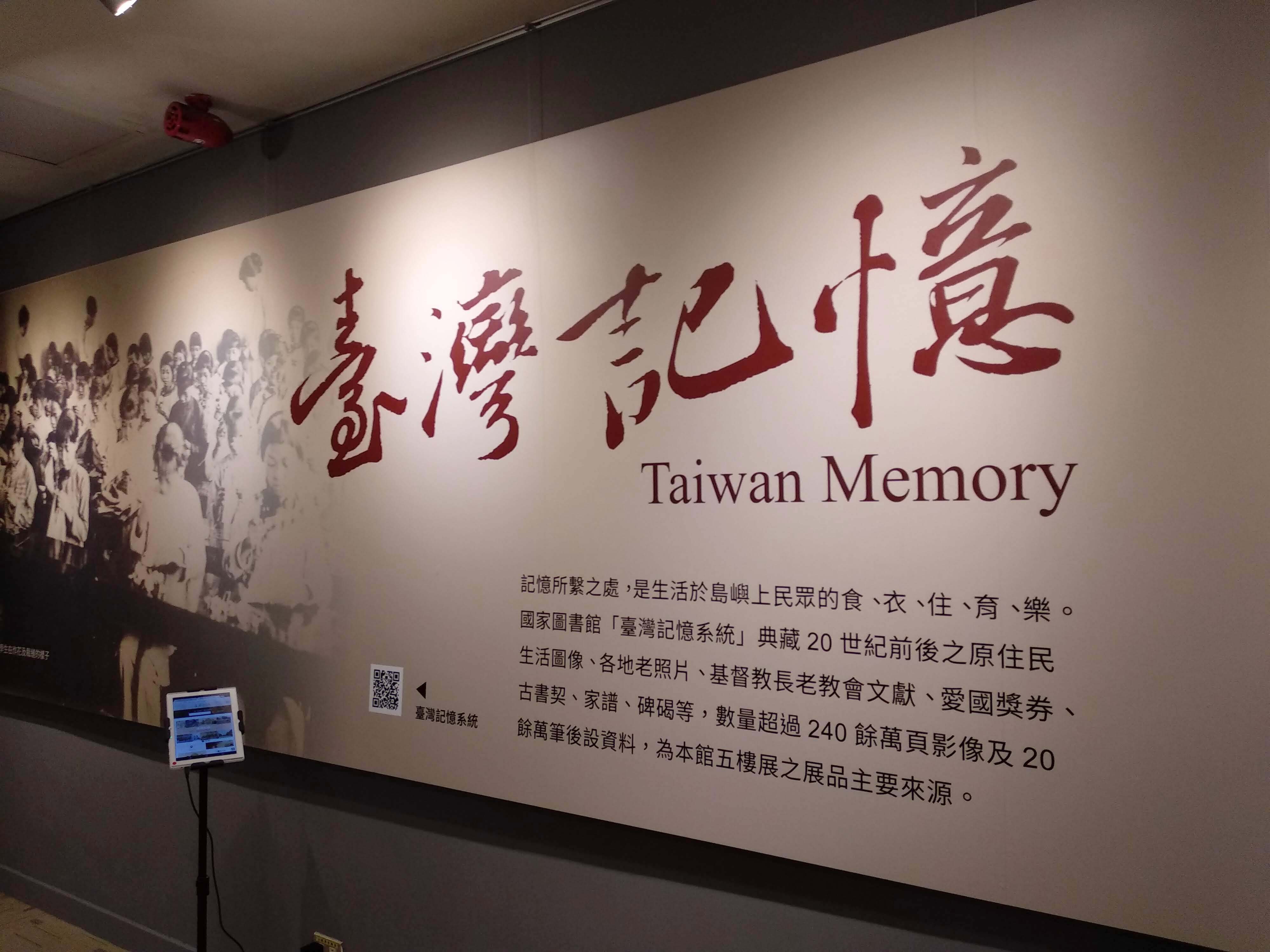 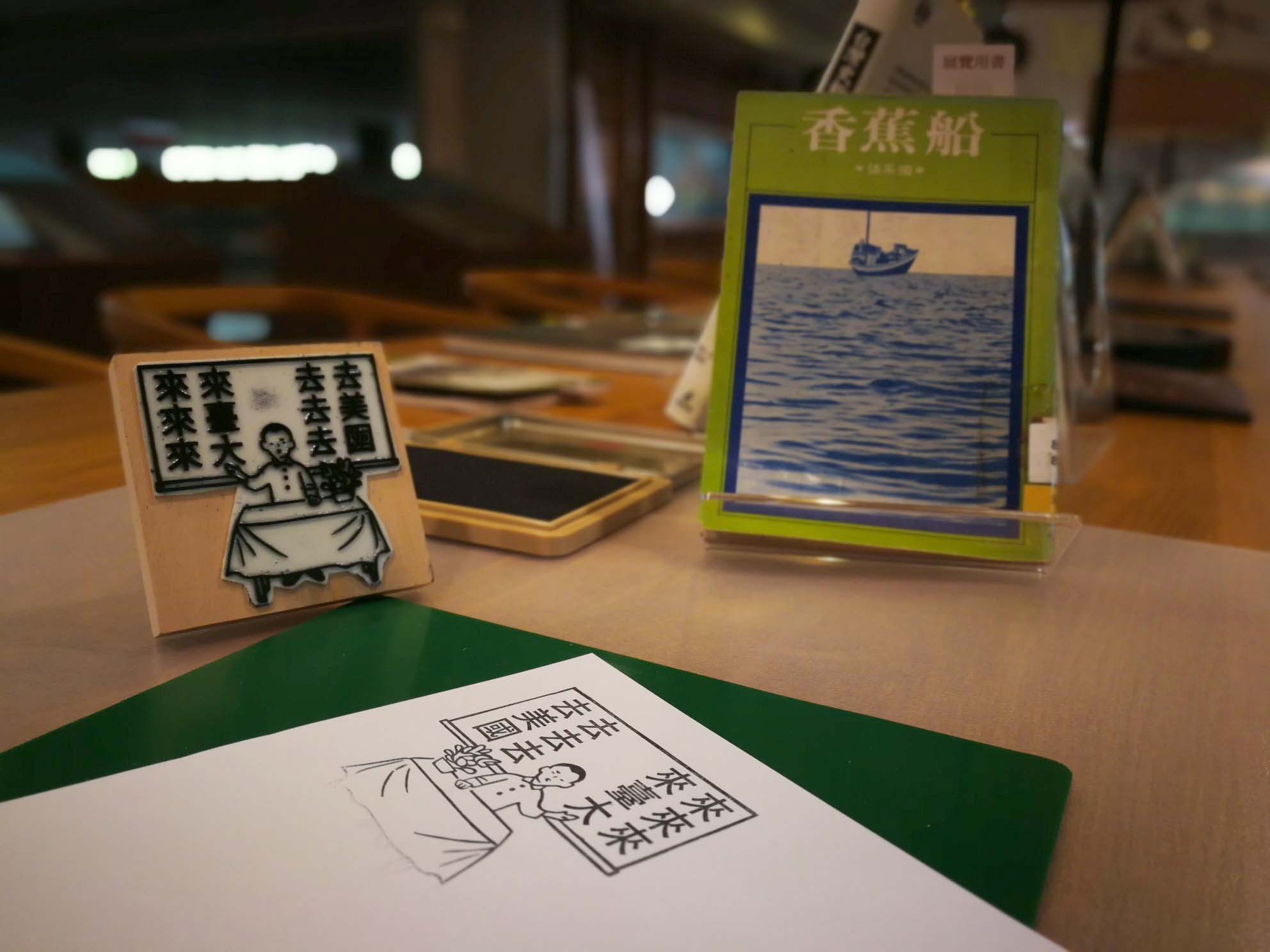 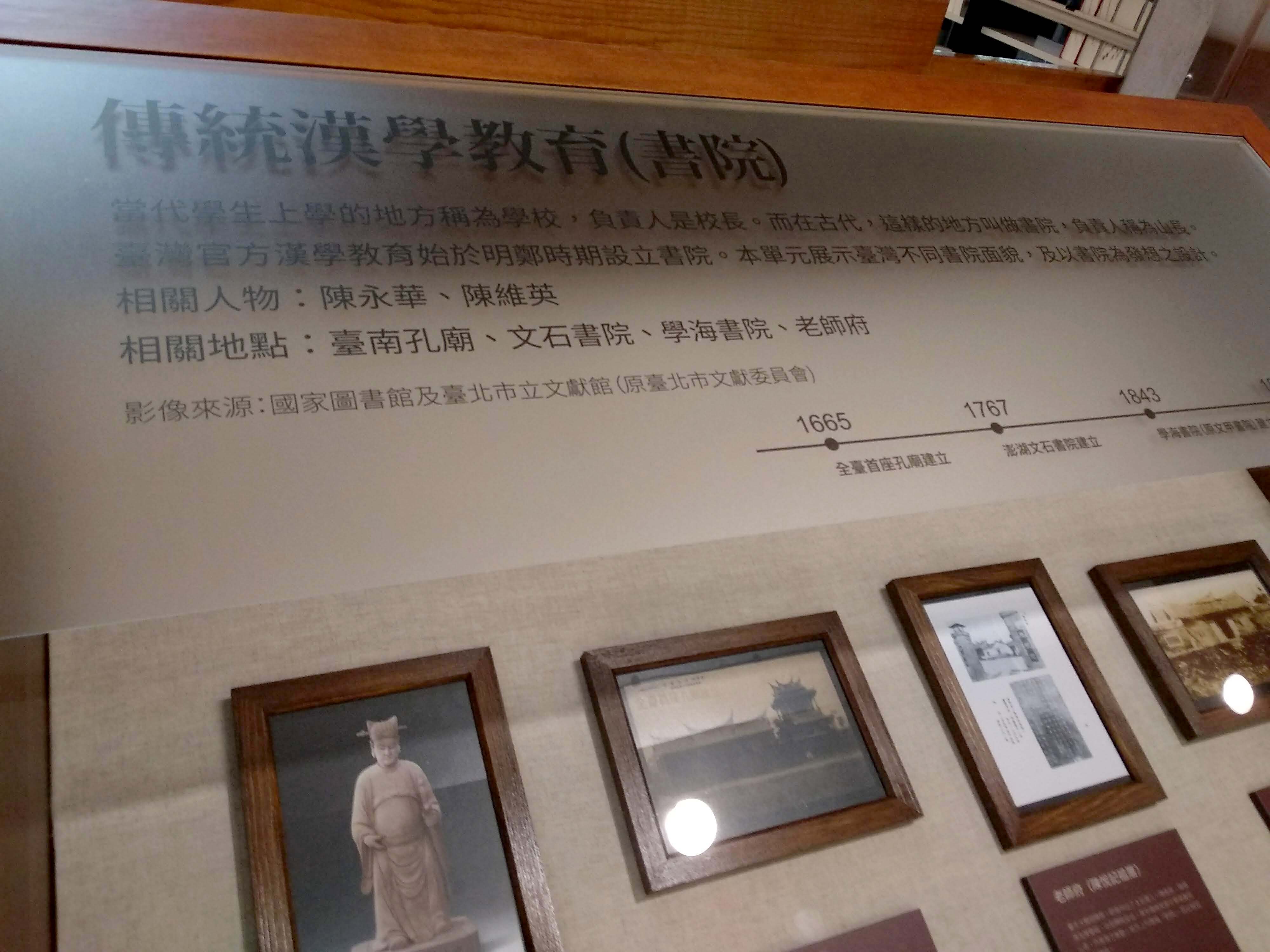 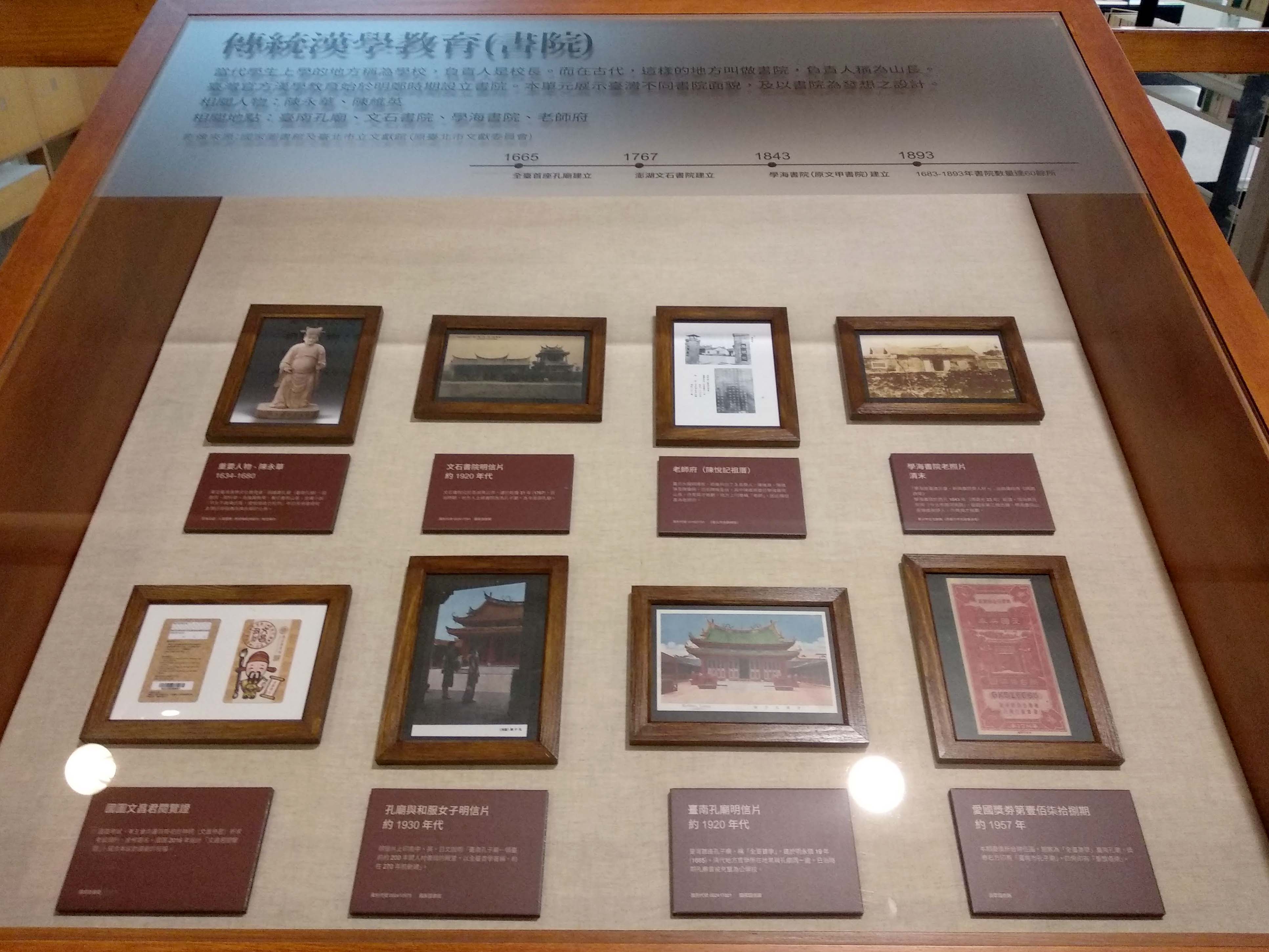 Memories are tied to things like food, clothing, accommodations, education, and entertainment of the people who live on this island. National Central Library’s Taiwan Memory database has archived images of aboriginal life before and after the 20th century, old pictures from all across Taiwan, documents from the Presbyterian Church, patriotic lottery tickets, old contracts, genealogies, and stele rubbings—numbering over 2.4 million images and over 200,000 records of metadata. This is the primary source for items displayed on the library’s 5th floor.

Presbyterian missionary George L. Mackay (1844-1901) came to Taiwan in 1872. He had an arrangement with Rev. Hugh Ritchie that Taiwan would be divided up at the Dajia River, with Mackay covering the northern half. This picture is of Mackay establishing the Oxford College in 1882. 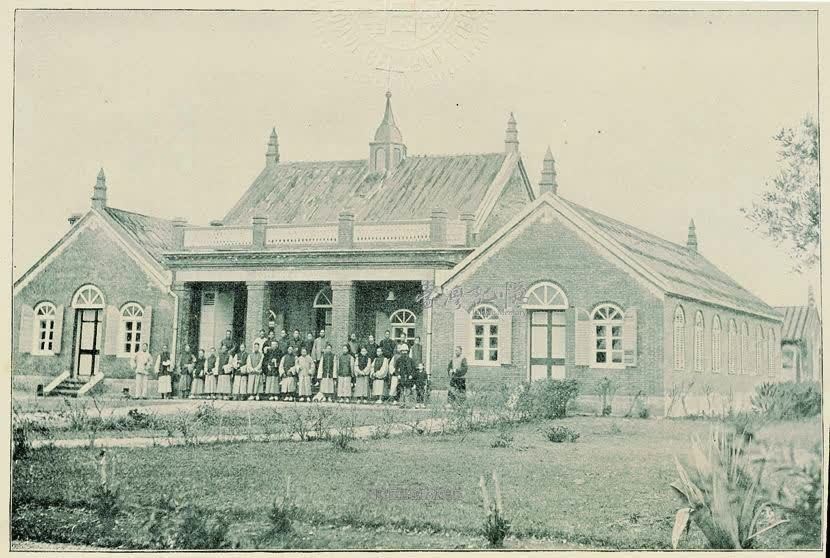 Oxford College in Tamsui
At the end of 19th Century，NCL Accession No. 19th0030 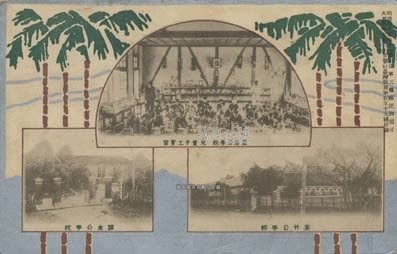 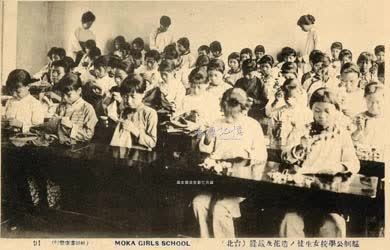 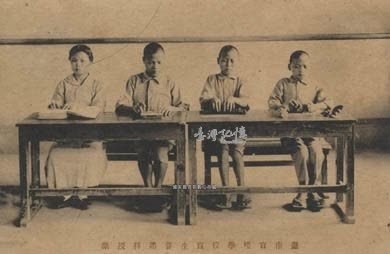 General courses for blind students at the Tainan School for the Blind and Mute
1920，NCL Accession No. 002417112 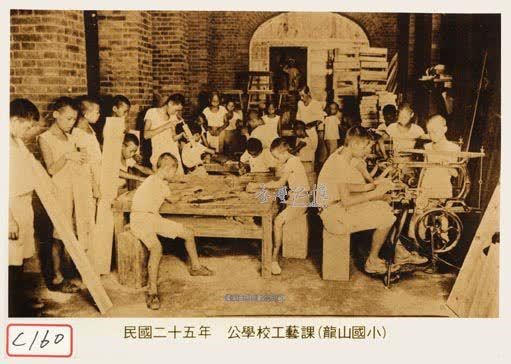 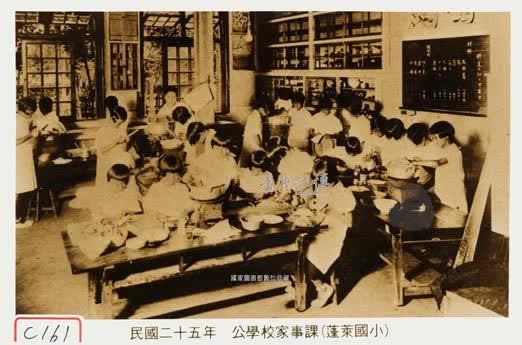 In modern times, students go to schools, where the head of the school is the principal. In earlier times, schools were called academies, and the person in charge was called the head scholar. Traditional Chinese education in Taiwan began during the Kingdom of Tungning (1661-1683) with the establishment of an academy. This unit displays the different faces of academies in Taiwan, as well as designs based on academies.

Chen Yong-hua was the founder of Taiwan’s traditional Chinese studies and cultural education, the proponent of building a Confucius Temple (the Tainan Confucius Temple), setting up academies, and starting the civil service examination. In an effort to promote education, he also functioned as the head scholar of the academy. In one of Jin Yong’s novels it says, “To never have known Chen Jinnan but to attempt to be a hero is a futile pursuit.” It is said that the leader of the Heaven and Earth Society, Chen Jinnan, was the incarnation of Chen Yonghua.

Taiwan’s first Confucian Temple is also known as “the first academy in Taiwan.” It was built in 1665. Local government schools in the Qing dynasty were often in the same location as the Confucius Temple. During the Japanese occupation, the Confucius Temple was once used as a public school.

Wenshi Academy was located in Makung City in Penghu. It was built in 1767. During the Japanese occupation, local gentry converted it into a Confucian temple. Today it is called the Penghu Confucius Temple. 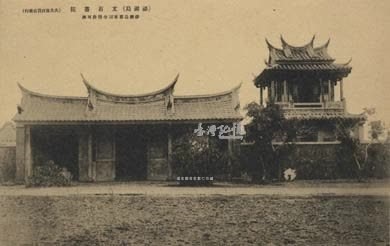 “Scholars and civil servants built northern Taiwan. A new academy is erected to develop talented persons.” This line comes from Huang Chun-qing’s anthology of poetry, Qingyuan shi cao.
The Hsuehai Academy was established in 1843. Currently it is called the Gao Ancestral Shrine (on Huanhe Nan Road in Taipei). It is a third-tier national historical site. Hsuehai Academy’s head scholar was Chen Wei-ying, who nurtured countless of the rising generation.

An old picture of the Hsuehhai Academy
Late Qing Dynasty，NCL Accession No. d182

The Chen family that lived in the Dalongtong district in Taipei produced three famous candidates of the provincial civil service examination: Chen Wei-ying, Chen Wei-zao, and Chen Zhao-xing. Their achievements were some of the highest in Taiwan. Of these three, Chen Wei-ying was appointed as the head scholar of the Hsuehai Academy. In that role he nurtured countless of the rising generation. Locally he was known as “the teacher.” So, the house they used to live in (now a temple) is known as the Teacher’s Mansion. 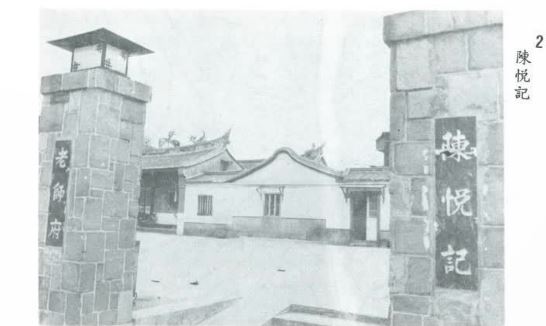 The postcard has “Tainan Confucius Temple: A hall for developing men of talent built around 270 years ago before the Qing dynasty annexed Taiwan; it is known as the first school in Taiwan” written in Chinese, English, and Japanese. 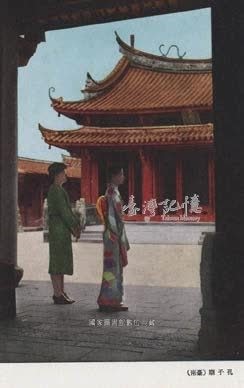 In preparing for a test, students will make an offering to the god of academic studies, Lord Wen Chang, asking for help in their tests. In 2016, NCL designed a library card with Lord Wen Chang’s image on it, signifying the blessings that NCL brings into the lives of its patrons. 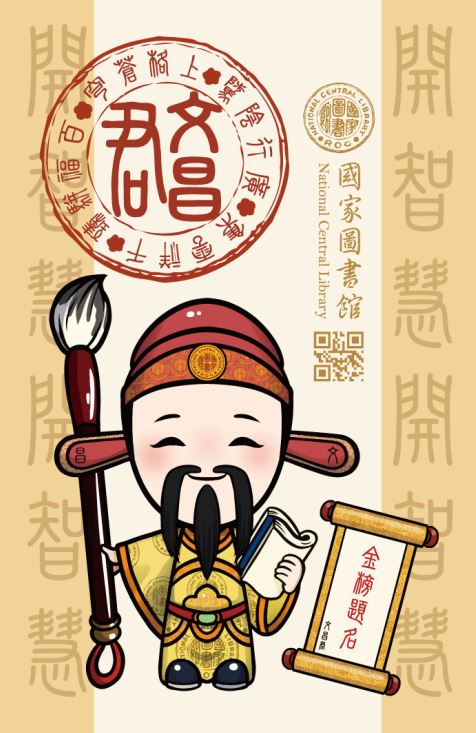 Western education in Taiwan started in the middle of the 17th century, when foreign missionaries set up church schools. During the Qing dynasty, Liu Mingchuan established a Hall for Western Learning. During the Japanese occupation, modern national education was introduced to the island.
This unit has on display what singing class, physical education class, and arts and crafts class was like during the Japanese occupation.

This is an aboriginal education center (during the Japanese occupation its was called “school for foreign children”) in Xiananao, Suao County, Taihoku Prefecture. Students were wearing Japanese style clothing. Standing in the middle was the inspector, who was also the teacher. 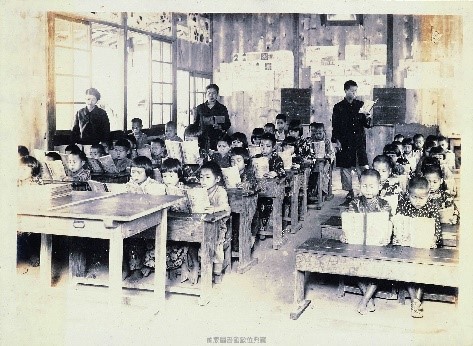 The aboriginal students at the Wushe Public School are in traditional clothing and are singing and dancing as the teacher plays music. 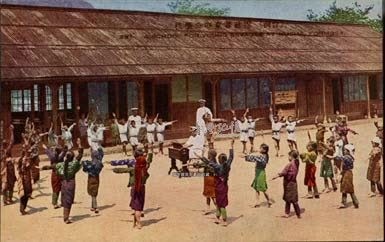 Judo originated in Japan. In the early 20th century, swordsmanship and judo were part of the physical education classes during the Japanese occupation. This picture is of male students practicing judo at the Taipei First High School (founded in 1898; known now as Taipei Municipal Jianguo High School). 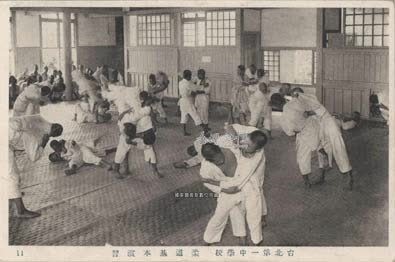 Wall bars were a common apparatus in schools during the Japanese occupation period. They were used to train abdominal muscles. The picture is of male students exercising at Tainan Normal School (founded in 1899; now known as National Tainan University). 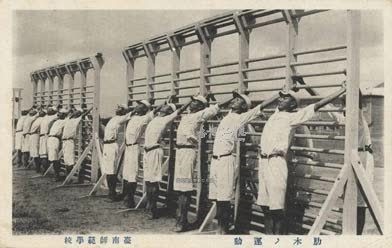 Tamsui Private High School for Girls (known now as Tamsui High School) was built in 1916. As depicted here, students are learning tea ceremonies (above) and flower arranging (below) in their life skills class. 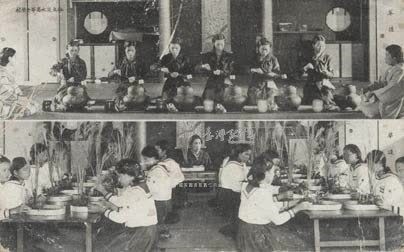 Do you still remember what it was like to be in elementary school? Do you still remember what was in your textbooks?
This unit displays Chinese language arts textbooks published by three publishing houses between 1945-1946. This will give people a chance to experience what it was like for students back then to go to class. It is hoped that everyone’s memory will be jogged as it pertains to what textbooks were like back then. If you go to the Taiwan Memory website, you can read all e-books there.

There are short sentences that accompany the illustrations, with both taking up equal space. These helped students recognize various family members and things one must do daily. Those in the illustration people are shown wearing traditional clothing. 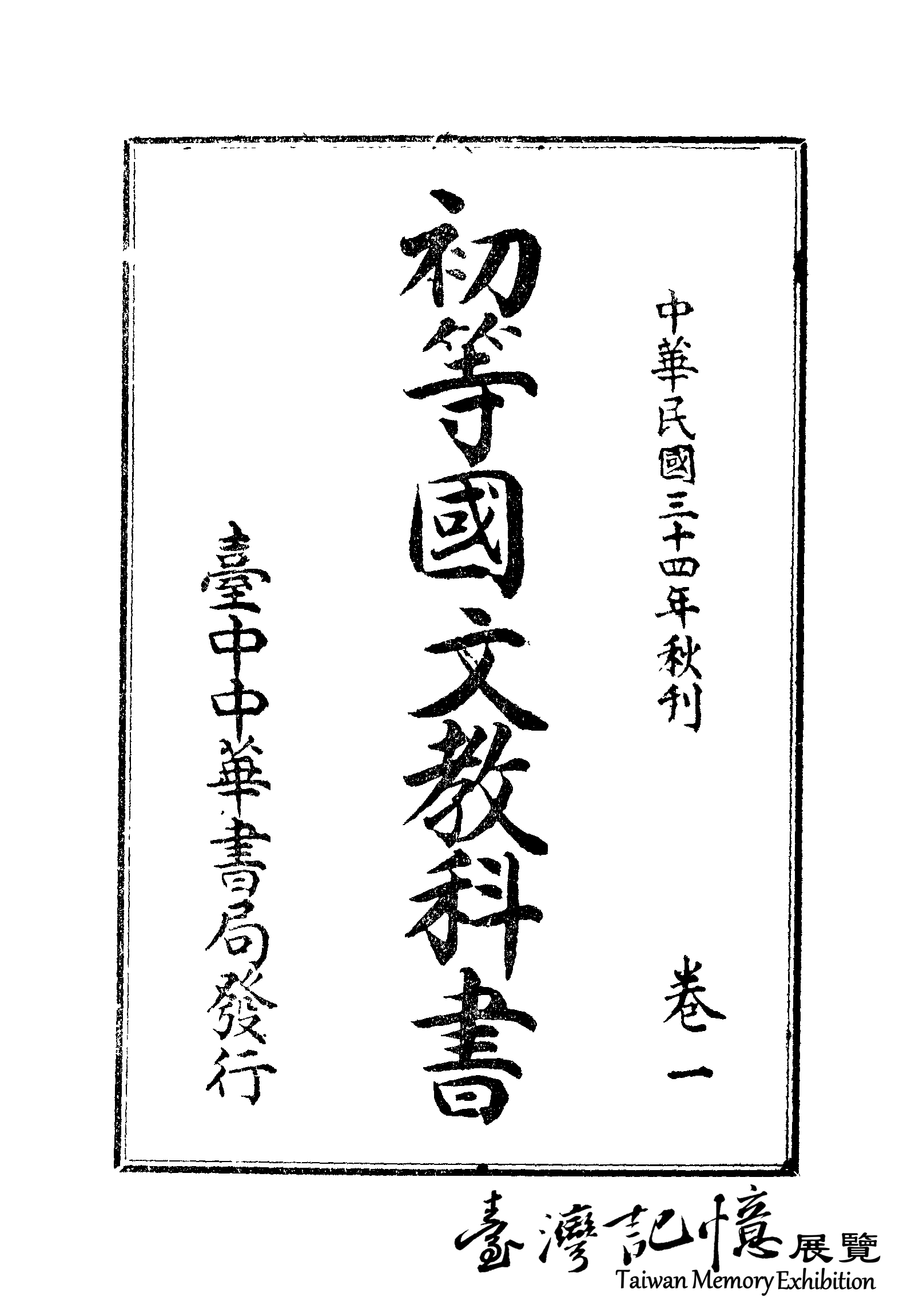 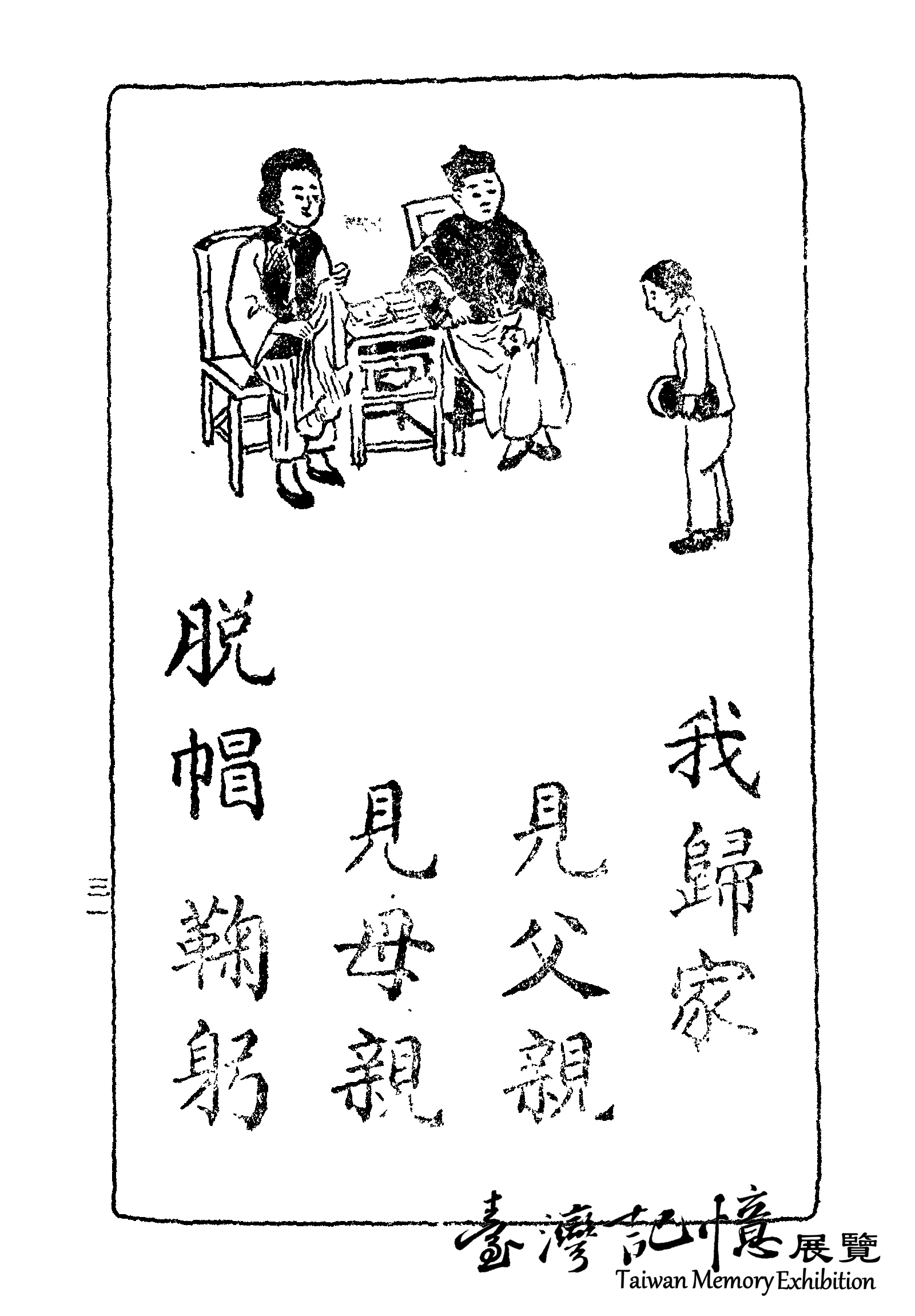 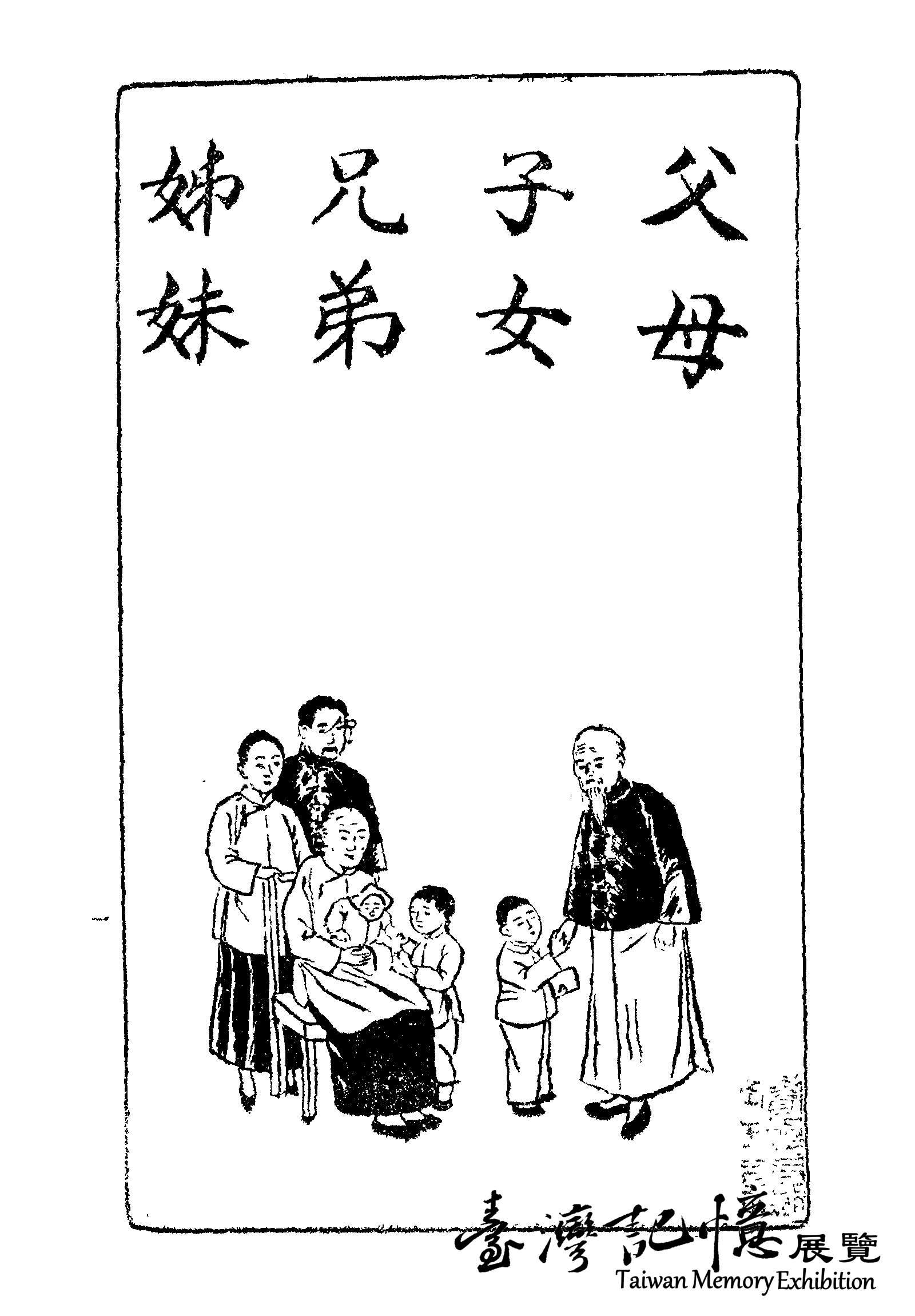 This textbook has the most writing with the fewest pictures. The people in it are wearing Western-style clothing. It was written in classical Chinese. Give it a try—can you understand it without modern punctuation? 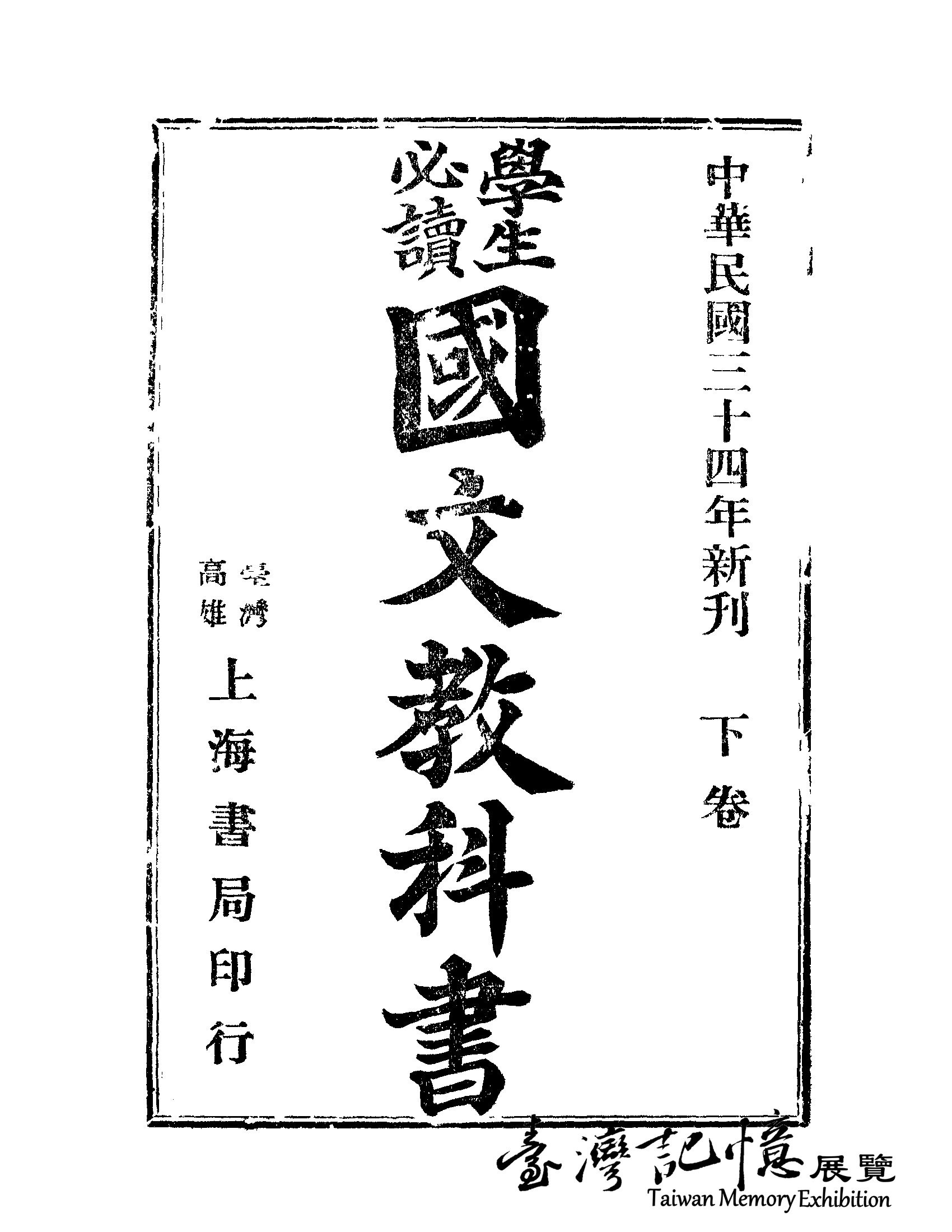 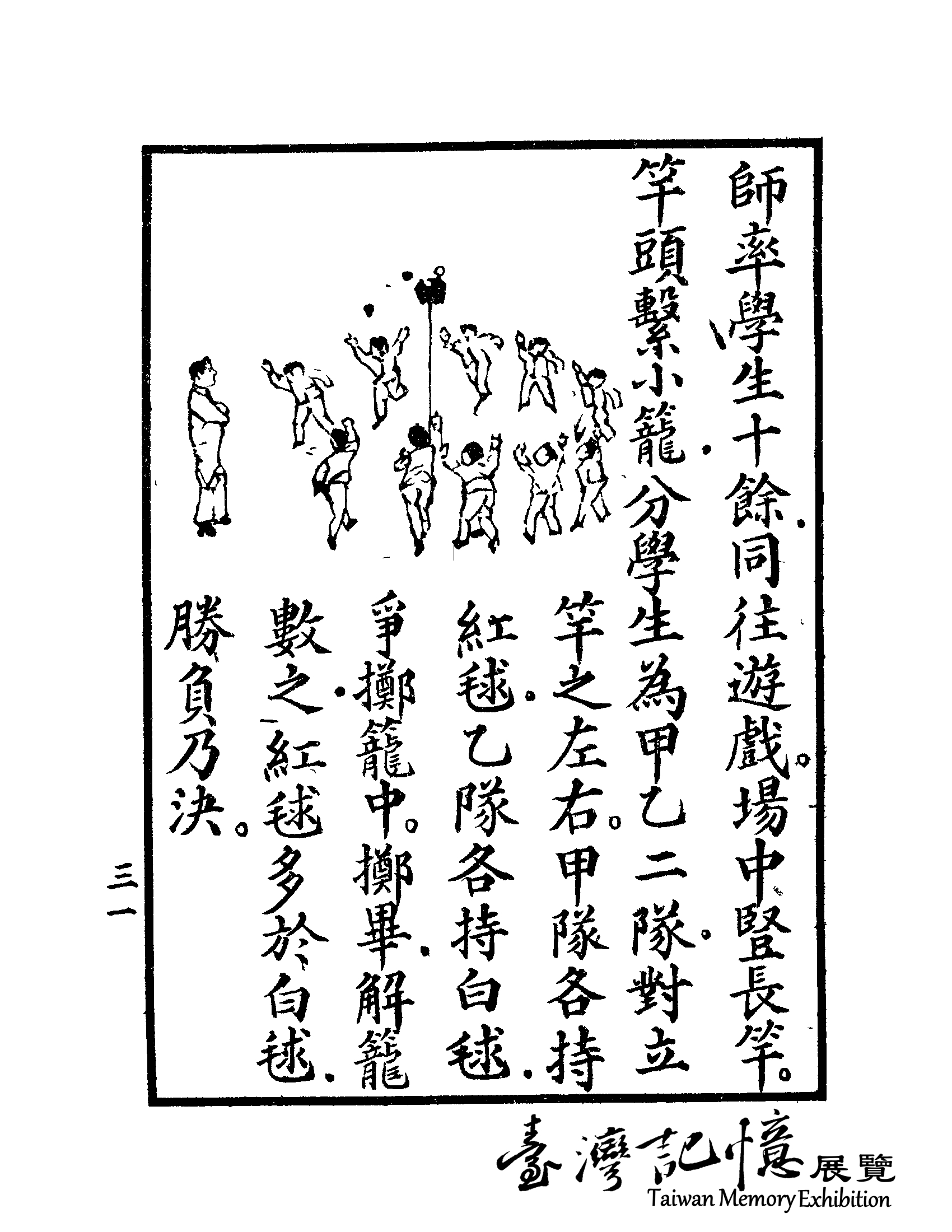 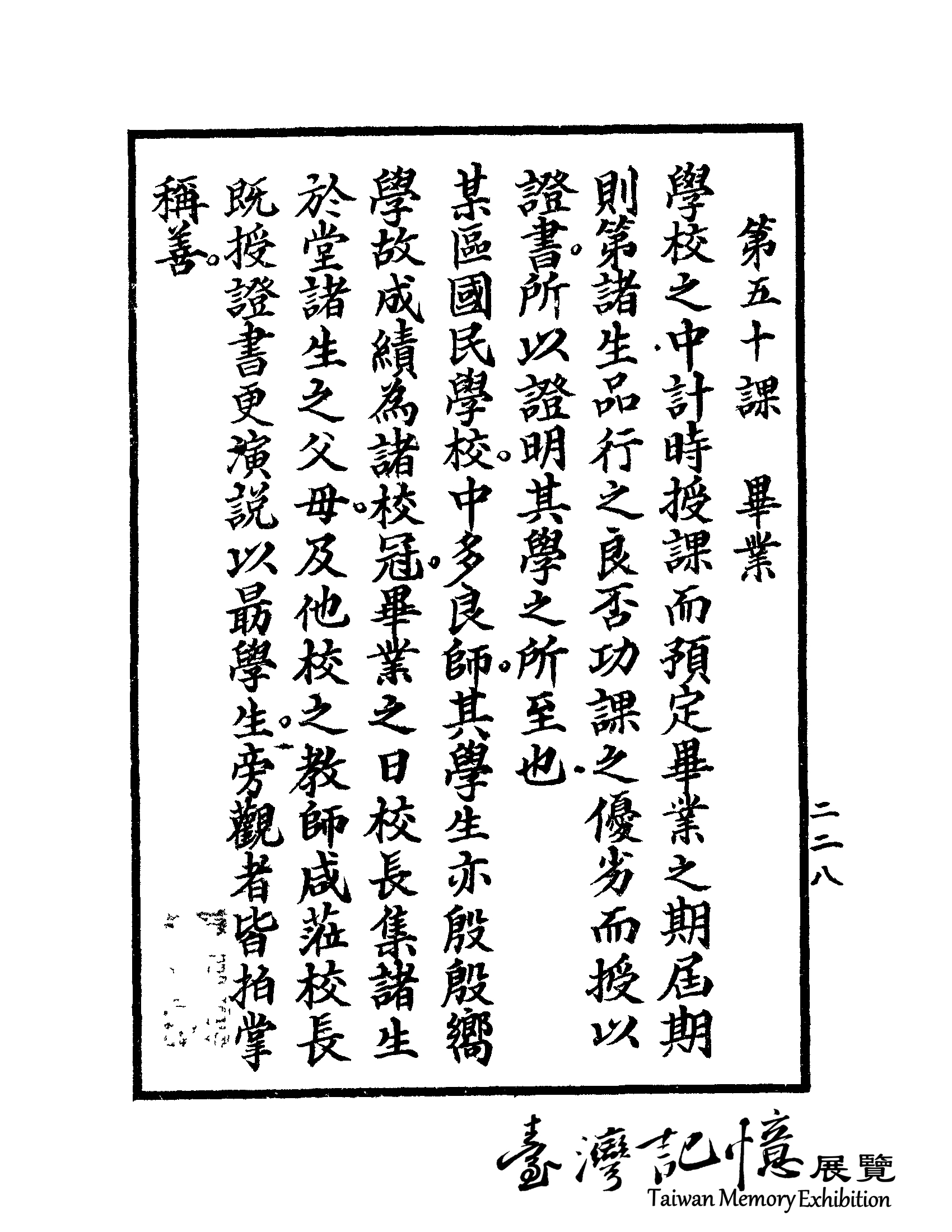 On the cover of the textbook is a boy wearing western clothing. In his hand is a Republic of China flag. The price of the textbook is indicated inside the cover, showing what things cost at that time. The illustrations inside show adults mostly wearing traditional Chinese clothes, with school children wearing western clothes. Each unit has a main text and practice questions. Have a look. Do you know the answers? 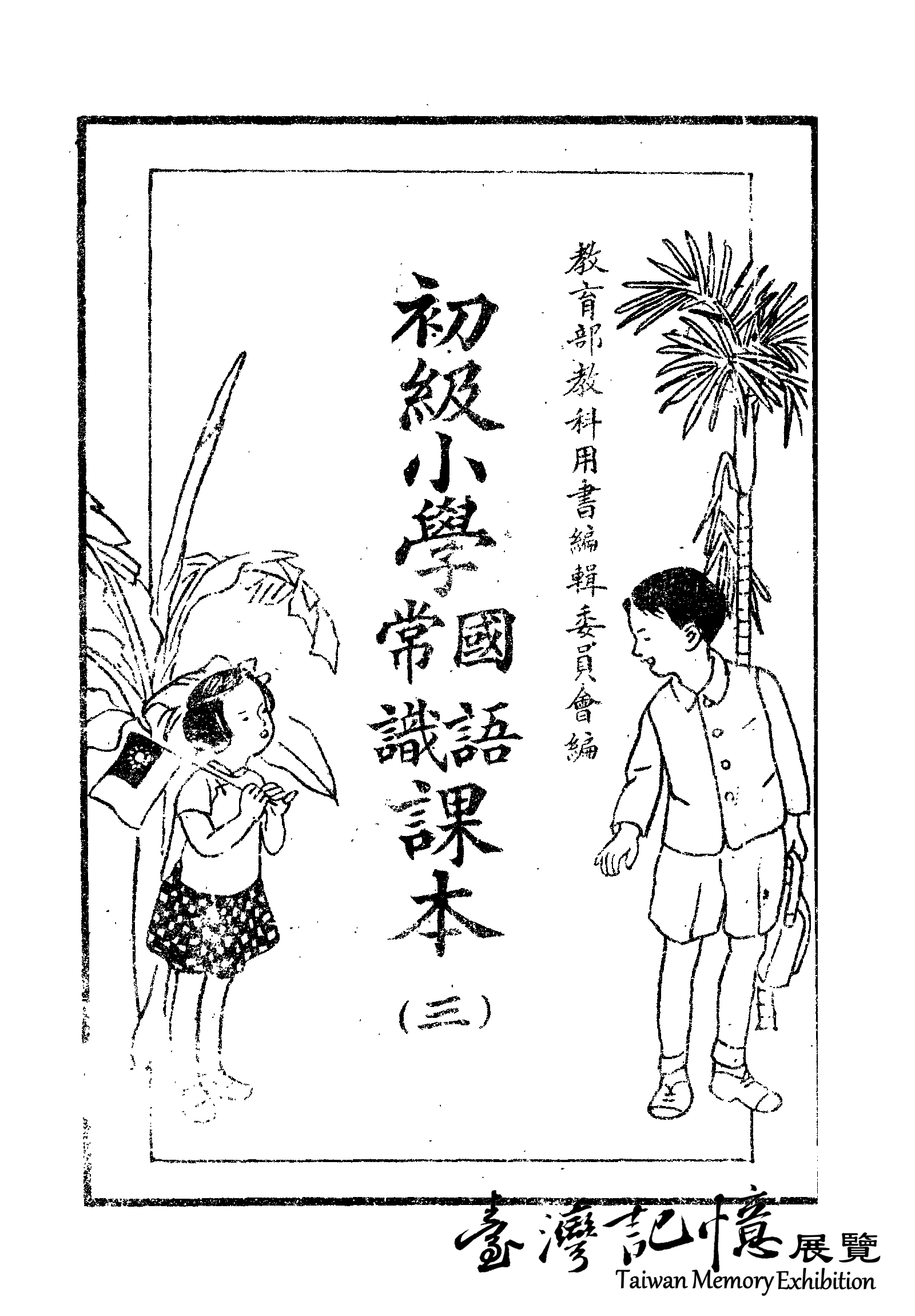 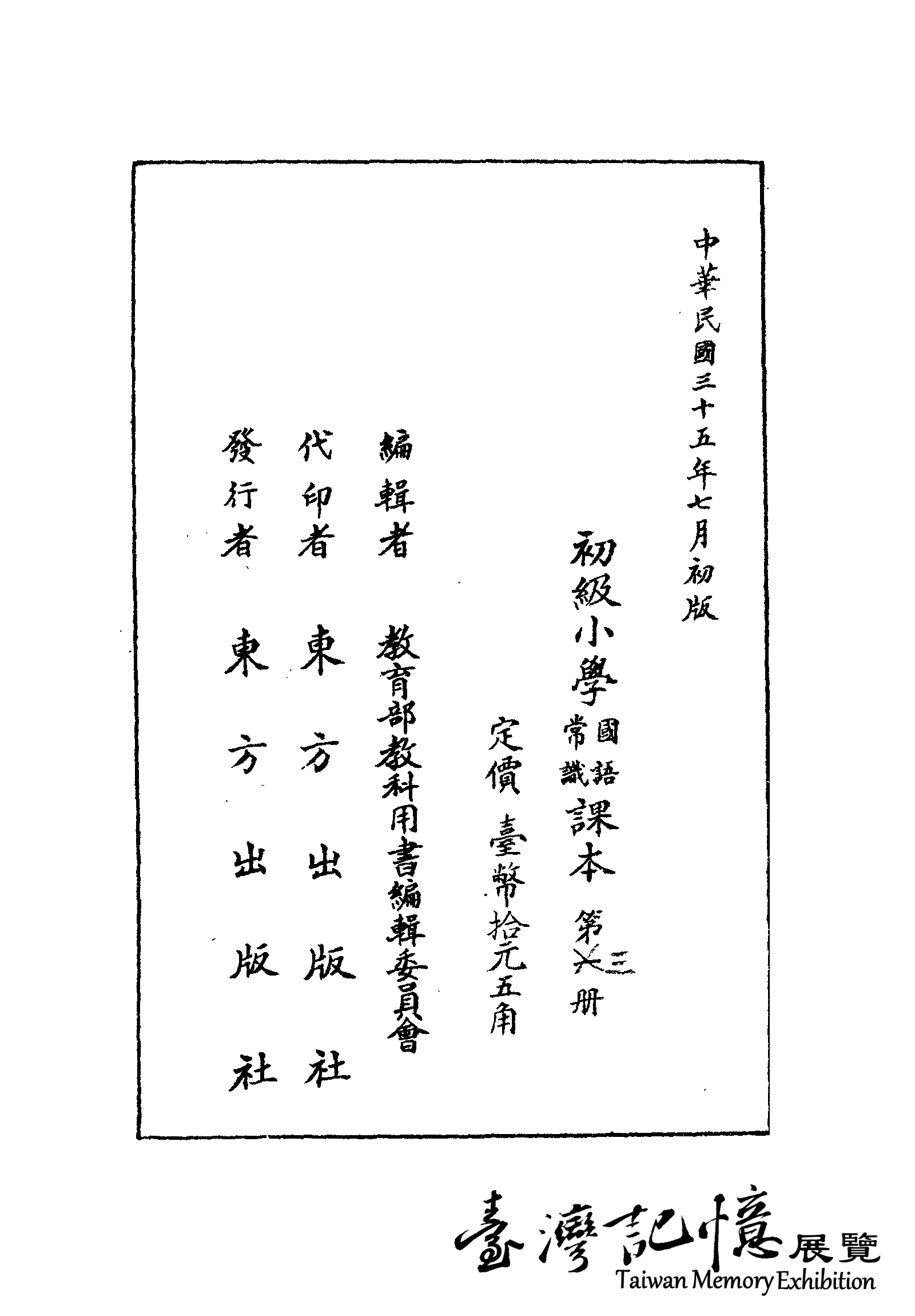 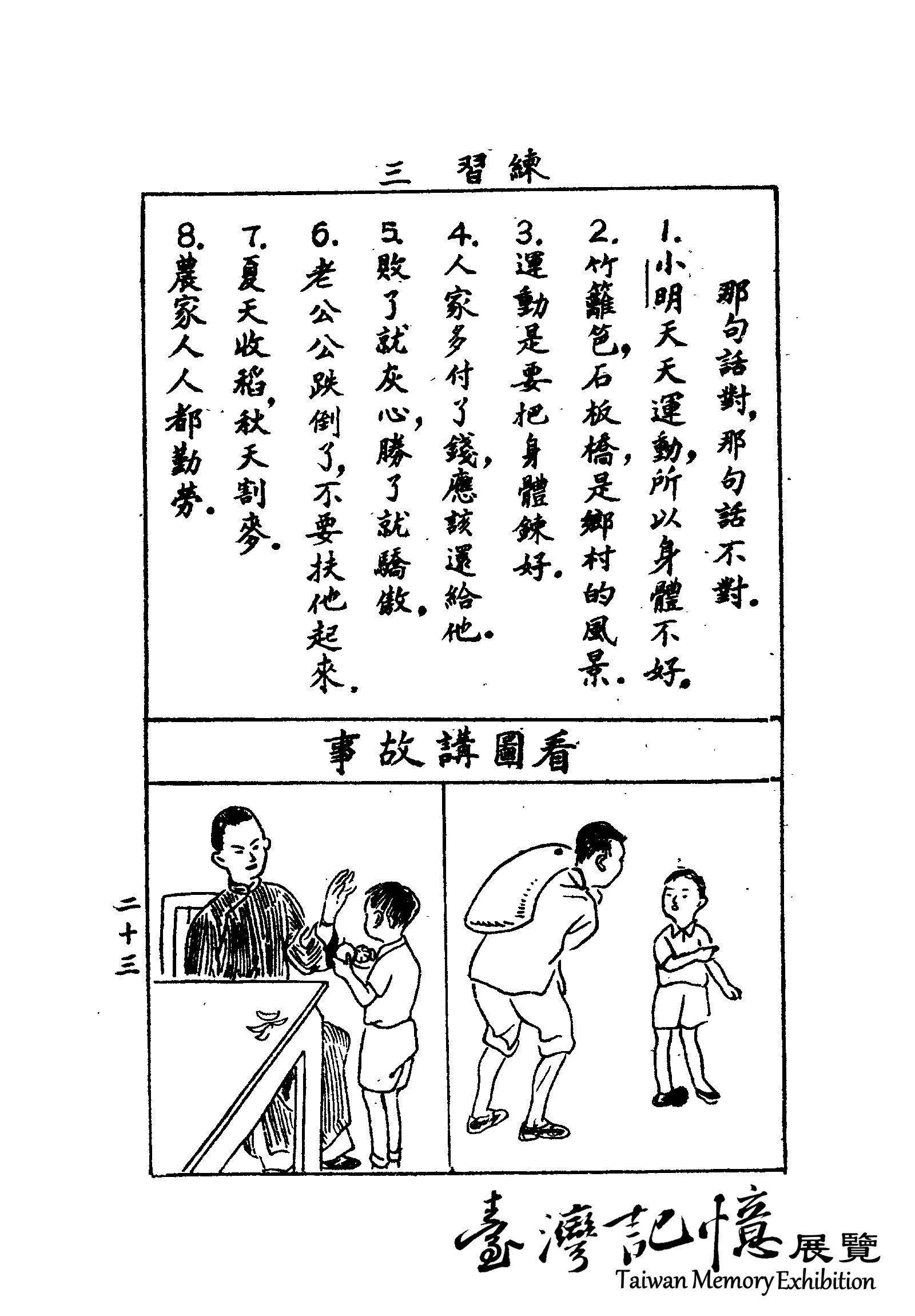